The house was built before 1840.  The Survey taken in 1840 shows it as part of Plot 328, a house, garden, and orchard owned by Mary Allen and occupied by George Williams.  The orchard covered the area which was later used as the site for the Town’s market.  We can’t identify Mary Allen. 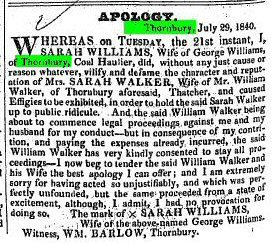 Notice of apology by Sarah Williams 1840

We were intrigued when we found the notice published in the Bristol Mercury dated 1st August 1840.  A copy of this notice is shown on the right.  It appears that Sarah had been spreading gossip about Sarah Walker around the town and had exhibited effigies holding Sarah Walker up to public ridicule.  We would love to know what caused this action!

George died and was buried on 27th January 1850 aged 42 years.  This is presumably about the time that his widow, Sarah, left the house.  The 1851 census shows Sarah, a widowed charwoman aged 46 living in Bulls Lane (in the house which later became known as 8 Bath Road) with Charles and George, both agricultural labourers aged 19 and 18, and her younger children, Mark aged 10, Charlotte aged 6 and Emma aged 4.

In the quarter ending December 1851 Sarah married again, this time to John Garlick.  The 1861 census shows John was a farmer aged 57 born in Killmartin, Wiltshire.  He is living in Bulls Lane, which is Lower Bath Road, with Sarah (who in this census is shown as being born in London), her sons, Mark an agricultural labourer aged 19, and Emma a nursemaid aged 14.  In 1871 John and Sarah are still there presumably in the same house but the address is now called Lower Bath Road.  John is described as an ‘occupier of lands’.  The rate books of this period show that John owned the two properties which later became 6 and 8 Bath Road and that they occupied the one which became number 8.  For reasons that are not clear, the 1881 census shows Sarah’s birthplace as London.  In 1881 they are still living in what was then called Bulls Lane.  Sarah’s birthplace is given as Wapley, Gloucestershire.  John died in 1881 aged 78.  Sarah died in 1887 aged 79 years.

We can’t explain the frequent movements of George and Jane between the Borough (which is in the town centre) and Crossways and Sibland (which were just outside of the town).  We are able to confirm that they are the children of the same George and Jane by the fact that all except Henry, Eliza, Ann and Jane lived at some time with George and Jane, and Henry had Bethia as a witness when he got married.

We suspect that George is the same person who was mentioned as living in part of 5 St John Street in 1818.  The 1841 census shows George and Jane were living in the same area of the town.  In this census, George is an agricultural labourer aged 50 and Jane was aged 45.  Their children living with them were: George an agricultural labourer aged 18, Job a mason’s labourer aged 13, Maria aged 9, Aaron aged 8, Joseph aged 5 and Hannah aged 3.  In the 1851 census, in addition to the persons named above, there were two other children listed in 3 Upper Bath Road; Frederick Williams aged 10 and Sarah Williams aged 8, whom the census record as George Gough’s ‘son’ and ‘daughter’.  These were actually the children of Ambrose Williams and Bethia (nee Gough) so the children were actually George and Jane’s grandchildren.  Bethia went on to marry thee times – click here to read more about Bethia

It is remarkable that all of George and Jane’s eleven children survived to adulthoood.  Of these, ten of them are recorded as marrying in Thornbury, and some of them on more than one occasion!

Joseph Goodenough – the 1876 rate book shows that Joseph replaced John Goodman as the occupant of the house.  We can find no information about Joseph.

Charles Pritchard – in the 1881 census the house was called ‘Streamleaze’.  It was occupied by Charles Pritchard, a groom aged 44, his wife, Ann aged 44 from Elberton, his children: Mark a groom aged 18, Eliza aged 13, George aged 10, all from Olveston, William aged 7, and Louise aged 5 both from Alveston and Charlie aged 3 from Thornbury, and grandson, John Smith aged 1.

Charles Phelps Pritchard was baptised on 21st April 1836.  He was the son of Frederick Pritchard and his wife, Eliza (nee Phelps), who came from Morton.  On 12th April 1859 Charles married Ann Neale, the daughter of John Neale, a labourer and his wife, Hannah.  The birthplaces of their children show that Charles and Ann moved between Olveston and Alveston before coming to Thornbury.  The family had moved to Thornbury about 1877 and settled in Upper Bath Road.

In 1891 Charles was a gardener aged 54 living with his wife, Ann, also aged 54 from Hazel, Olveston and their children: Louise aged 16 from Alveston, Charley a coal merchant’s assistant aged 14, Frank aged 10, and his wife’s widowed mother, Hannah Neale aged 76 and his widowed brother, George Pritchard aged 58.  Ann died aged 61 years and she was buried on 30th June 1897.

Charles re-married in March quarter 1901; his new wife was Mary Ann Wallis who came from Berkeley.  In 1901 Charles and Mary were living at Buckover where Charles was employed at a jobbing gardener.  Charles died aged 73 years and was buried in Thornbury Cemetery on 12th November 1909.  His address at the time of his death was still shown as Buckover.

In 1901 the house, then called Streamleaze Cottage, was vacant.

Thomas and Emily seemed to move around a lot.  The 1880 rate book and the 1881 census shows Thomas and Emily were living in St Mary Street, we think it was the house which later became known as number 37 St Mary Street.  They were living there with their children, Edith Annie and Charles Edward.  The 1885 and 1890 rate books shows the family had moved to the house owned by the Corporation which later became known as 8 St Mary Street.  We know that from about 1891 to about 1901 Thomas and his family were living at 17 St Mary Street.  The 1904 voters list shows Thomas was living at Streamleaze at that time.  Their daughter, Elsie May died in 1905 when their address was Raglan Castle.  Both these addresses seem to refer to the house later known as 3 Upper Bath Road.  The 1905 rate book shows that Thomas vacated the property on 31st December 1904. Postcards sent to Emily in 1906 and 1907 show she was living in Gillingstool Hill.  One card dated 1908 gives her address as being in ‘Crossways’.

Thomas died in Thornbury aged 55 in 1908.  The 1911 census shows Emily living at 64 High Street with her son, Herbert Thomas.  Emily was described as being ‘supported by her children’ and Herbert was working as an assistant to a cycle agent.  Emily died in Oldfield Park, Bath aged 60.  She was buried in Thornbury Cemetery on 29th September 1915.  Two of Thomas’s children, William and Louisa, later lived in 16 Rock Street.  Click here to read more about them

Thornbury Rural District Council – on 17th August 1906 Francis William Yates, the owner of the property, agreed to lease it to Thornbury Rural District Council for 14 years at a yearly rent of £16.  The property was described as ‘a messuage or dwelling house, stables and paddock situate at the upper end of Streamleaze’ lately in the respective occupancy of Thomas Alsop and Thomas Exell’.  We have taken this to mean that Thomas Alsop occupied the house and Thomas Exell the paddock and stables.  Thomas Exell was a grocer and corn dealer in the High Street from about 1889 up to the 1920’s.  It is probable that he would have used horses in his business, to make deliveries, and therefore required stables.  An agreement dated 1st September 1906 shows that the Council quickly let the house, pigsty and garden (late in the occupation of Thomas Alsop) to William Phillips for a monthly rent of 11 shillings.  The Council used the property as a small depot.  We have been told that the steam roller was kept there, and the 1910 rate book describes the property as ‘agricultural land, stables and refuse sheds’.

In 1909 the Council began making plans to relocate the Town’s cattle market from its position on The Plain where it blocked the town’s main street for several hours on market days.  There were threats from the Board of Agriculture that the market could be forced to close because it was unsanitary and should be on a proper paved area which could be cleaned.  The land at Upper Bath Road was one of four alternative sites considered by the Council and it was the one chosen.  In 1910 they arranged for the purchase for £950 of over 3 acres of land from Francis William Yates.  This included the house and stables which they continued to let to William Phillips, the rest they used for the site of the new market and for allotments over the rest of the land.  The ‘Council Depot’ moved to a new site further along Upper Bath Road nearer the railway station.

It is interesting to note that the Council applied in 1911 to improve the drainage at the house by connecting it to a cesspit in the market.  The house was then referred to as the ‘Engineman’s House‘.  We have been told that the house used at some stage in the past to keep the Council’s steamroller and know that William Phillips was described as ‘engine driver – steam roller’ so we assume that naming the house ‘Engineman’s House refers to the steamroller rather than anything to do with the market.

John Blenkinsopp was known locally under the name of ‘Jack’.  He had moved to Thornbury from County Durham in the early 30’s.  He is listed in the 1931 electoral register as living at 7 Eastland Road.  We understand that John was a builder and he moved south for work.  He was employed as a bricklayer, initially by Bristol Tramways working on the maintenance of their buildings, then on the construction of houses in Monks Park and Hortham Hospital.  He later became a builder working for himself.  On leaving the Grammar School, Mollie worked for some years as a typist in a local solicitors until she left to bring up her family. 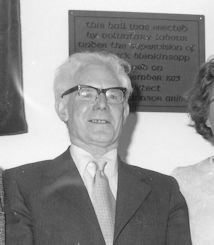 John and Molly had three sons: John Phillips Blenkinsopp born in 1934 and who went on to work as a civil servant, Colin born in 1937 who worked as a prison officer and Roger born in 1940 who became a teacher.  The family were living in Bristol until about 1940 when they moved to Thornbury.  Initially they lived in a small house next to the Exchange Hotel at 61 High Street where they are shown as living in the 1946 electoral register.  Molly’s uncle, Harry, a painter and decorator lived next door at 63 High Street.

In 1947 John and Mollie moved to 3 Upper Bath Road.  We know that they were in this house by 1948 as they were both appointed Trustees of the Methodist Church in that year and their address was 3 Streamleaze (one of the known addresses for this house).  John was able to use his skills as a builder to assist with the construction of the single story Methodist Church Hall which replaced the old tin hut in 1975.  The image on the right shows John standing in front of the memorial plaque in the church.

Mollie was also very active in the church, following her mother as Sunday School Superintendent.  She also enjoyed participating in amateur dramatics, playing a part in a local production of ‘My Lady Jennifer’ in the Cossham Hall and in other productions of the local dramatic society.  During the War she served in the canteen for the servicemen stationed in the area.  Mr Blenkinsopp is listed as a builder living at Streamleaze in the 1967 programme for the Flower Show.  John and Mollie carried on living in Upper Bath Road until John died on 22nd March 1993.  He was aged 85.  Mollie carried on living there until 2000 when she moved to Castle Court until she died on 23rd June 2002.

Go to history of the house
Toggle Sliding Bar Area