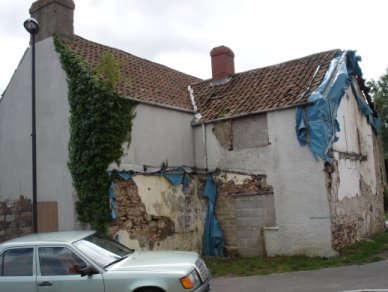 The address of the house has proved to be very confusing.  At various times it has been known as 3 Streamleaze, and numbers 1 and 3 Upper Bath Road.

As you can see from the photo on the left taken in 2008 the house was then derelict.  Although there were plans to restore it and make it suitable for community use, it was demolished in 2014 to be replaced by new housing development.  The front garden (which is behind the house in the above photo) was landscaped in 2008.  It is now open as a Community Garden and is well worth visiting.

The house was built before 1840.  In the Tithe Survey taken in 1840 it was part of Plot 328, a house, garden, and orchard owned by Mary Allen and occupied by George Williams.  The orchard covered the area which was later used as the site for the Town’s market.  Originally the house was very much on the edge of town and the land was used for agricultural purposes.  This is illustrated by the fact that in various census records the house is referred to as ‘Streamleaze’ or ‘Streamleaze Cottage’.  This name comes from the name of the field to the east of the property.

From the time that the Rural District Council first leased and then bought the property from Francis William Yates in 1910 it was used by the family of William Alfred Phillips, a Council employee who drove a steamroller.  In documents after the acquisition it was described as the “Engineman’s House”.  We have been told that the steamroller was stored outside the house. 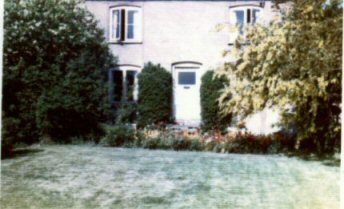 The rear of the property

The house was quite a large one compared to many in the older part of Thornbury.  A member of the Blenkinsopp family who last occupied the house has speculated that the house may have been two houses at one time.  Apparently there was a separate staircase in the rear part of the house.  In the early years of the house most of the official records we have seen only mention one house and one family.  There may have been an alteration and the house divided into two at some stage in its history.  Certainly in the mid 1900’s we have been told of two families sharing the house with Mrs Phillips; Sydney George Smith who is listed as living there in 1946 electoral register and his wife Alice Olivia (who was not listed in that electoral register, but was with Sydney when they were living in North Road in 1950) and the Cavanaghs, a family of Dutch evacuees who also lived with the Hopkins family at Raglan Castle (11 Upper Bath Road).  It is possible that this ‘separate’ house may explain why the house is now called number 3.  Number 1 may have been the smaller attached bit in the rear.

The Council apparently did not spend a great deal of money modernising the building and the bathroom was not added until after 1965 and that apparently was at the occupier’s expense.  The photo on the right above shows the front of the house after the doors and windows were eventually replaced by the Council.