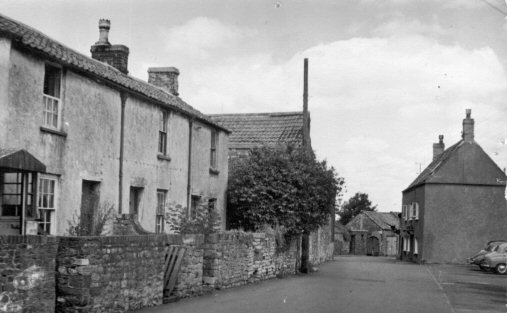 The houses on the left in the above photograph were the row of houses known as 2 to 8 Upper Bath Road.  Number 4 was the second one from the far end.

We are grateful to South Gloucestershire Council for allowing us access to the deeds and documents that relate to this house and its neighbours.  From these documents we have learned the details of some of the early owners and occupier of this property.

It is clear from the documents in the folder that numbers 2 to 8 Bath Road were built on what had once been a large close of ground called the Paddock.  Part at least of the Paddock was planted with fruit trees and became known as the Orchard.  Click here to see a plan of the original paddock and who bought the land

The land on which these houses (later numbers 2 and 4 Upper Bath Road) were built was bought from the trustees of Matthew Mills by William Ann.  They do not appear in the 1840 Tithe Survey as houses although one house may have been built by the 1841 census.  We are not certain when they were built.  They were owned by Mrs Ann later to become Mrs Martin.  Click here to read about the owners

James and Sarah Smith – in 1861 the house appears occupied by James Smith, an agricultural labourer aged 42 and his wife, Sarah, aged 32 from Almondsbury and Orlando Beale aged 9 and Eliza Beale aged 6 who were described as a son-in-law and daughter-in-law.  Click here to read more

Thomas Ford – the 1894 rate book shows Thomas Ford was living in the house.  In 1890 he had been living in 12 Upper Bath Road.  Click here to read more

Sarah Ann Vizard  – the 1901 census shows the house occupied by Sarah Ann Vizard, a widow aged 73, living with daughter, Amelia aged 26, grandson Ernest H aged 8 and lodger Enoch Trayhurn, a gardener aged 32.  Sarah Ann Davis was baptised on 23rd August 1833, the daughter of William Davis, a labourer from Crossways and his wife, Anne.  On 5th March 1854 Sarah Ann married William Virgo, a labourer and the son of John Virgo, a shoemaker.  They had one daughter, Harriett born about 1855 before William died in the December quarter of 1855.

On 25th October 1857 Sarah Ann married again – this time her husband was John Vizard, a widower, and a labourer aged 35 from Alveston.  John was the son of Giles Vizard, labourer and Mary Stephens.  John married Emma Pick in 1845, but she had died of influenza in 1854.  John already had 4 children from his first marriage and Sarah Ann had one, but they went on to have 11 children of their own!

In 1861 census John and Sarah Ann were living at Alveston Down.  Living with them were two children from John’s first marriage, Mary aged 11 born in Cromhall and Henry aged 6, and the daughter from Sarah Ann’s first marriage, Harriett Virgo aged 5, and two daughters of their own: Hester aged 2 and Roseanna aged 1.  Apart from Mary all the other children were born in Alveston.

In 1871 they were living in Upper Bath Road down the road from Michael Canty’s lodging house.  John and Sarah had 7 children with them: Harriet now aged 16, and Rosenia aged 12, both servants, Edward aged 10, Charles aged 6, Frederick aged 4, William aged 2, and Jemima aged 6 months.  In 1881 John and Sarah Ann were living in 2 Lower Bath Road with 7 children: Edward, a groom aged 19, Charles aged 17, Frank aged 15, and William aged 12, all labourers, and Emma aged 10, Julia aged 8 and Amelia aged 5.  This census shows that Charles and Frank were both born in Frampton.  They had had one more child, Annie baptised 23rd July 1876 who was buried on 3rd October 1877. 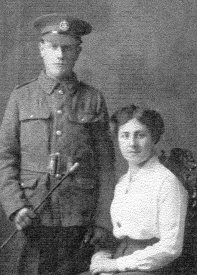 By 1901 Sarah Ann had moved to 4 Upper Bath Road.  In Sarah Ann’s later years, she looked after the children of her daughter, Julia, after she died.  Julia had a son, Ernest Henry Vizard baptised on 5th March 1893 before she married Alfred Harris and 3 more children after the marriage: Dorothy Amelia baptised on 20th June 1894, Mabel baptised on 27th July 1896 and buried four days later, and James Alfred baptised on 26th March 1898. Julia died aged 26 and was buried on 10th June 1898.  The photo on the right shows James Harris and and his sister, Dorothy.

Sarah Ann died in 1906 aged 74.  The 1911 census shows the house was occupied by Sarah Ann’s daughter, Amelia Vizzard, who was described as an ‘invalid’.  She was living in the house with her sister, Jemima Sainsbury aged 41. Amelia, died aged 37 on 26th December 1912.

Ernest Henry Vizard – baptised on 5th March 1893, the son of Julia Vizard.  He was looked after buy his grandmother Sarah Ann Vizard after his mother died in 1898.  By 1911 he was working in service.  An article in the Gazette in 1950 mentions that he had worked for Major Mundy but in 1911 he was a servant of a retired colonel in London.  In 1915 he sailed for America.  We are not sure if he went there as a servant with his employer or whether he went seeking his fortune.  Either way he did rather well for himself.  The online archives of passenger lists show that he returned to the UK several times throughout the 1920s and 1930’s sailing on the luxury liners such as the Mauretania.  He was described as a valet, waiter or secretary in these records and appears to have remained single.

However in spite of only living in Thornbury for a short time and having a difficult childhood he stayed in contact with people in the the town and appears to have been sent copies of the Gazette newspaper to enable him to keep track of local events.  According to an article printed in the Gazette in May 1950 Ernest, then living in North Salem, New York, had read that the gates of Thornbury Cemetery were in need of repair.  He wrote to the Parish Council explaining that ‘as two of my relatives lie within I would like the opportunity of replacing the gates similar to the existing ones’.  He asked if an estimate of the cost could be sent to him’.  The Chairman proposed that when the gates were erected some suitable inscription might be placed on them and a photograph taken and sent to Mr Vizard.  The Council agreed and the W. W. Pitcher & Sons were awarded the contact at £35.  We note that Ernest continued visiting England in the 1950’s and that his contact address whilst here was at Mount Pleasant, Henbury.

Ellen Annie Sherman – a sale notice dated 1916 shows that the house was occupied by Miss Sherman at a rent of 2s 6d per week.  The sale notice mentions that this house has a pig sty.  The electoral registers of 1918 and 1921 show that this was Ellen Annie Sherman.  Ellen died aged 57 in May 1927.  The newspaper report mentioned that she had been living alone at Upper Bath Road and that she had been acutely deaf for a long time.

Ellen was baptised in Thornbury on June 4th 1871, the daughter of Aram and Mary Sherman, nee Price.  In 1881 the family were living in Gillingstool.  Aram was a basketmaker aged 54 from North Nibley and Mary was aged 48 from Brockworth.  Ellen had an invalid brother, John, aged 21 who was born in Brockworth.  Aram died in 1891 just before the census.  He was aged 64.  In the census Mary was a laundress, still living in Gillingstool.  John had become a basketmaker and Ellen a dressmaker.  We can’t trace Ellen in the 1901 census.

Annie Sherborne – the 1925 Valuation list and 1926 rate book show that Annie was the occupant of the house.

Stanley Walter Augustus & Dorothy Jessie Taylor – the electoral register show that the Taylors lived there from about 1950.  The electoral register 1946 shows that they were living at 2 Market Site.  Although ‘Market site’ was the address which normally referred to the Council houses built in Bath Road, there are other cases where it has been used to refer to the houses in Upper Bath Road, so the Taylors may have been living there earlier.

Stanley and Dorothy had been living at Filton.  When they were bombed out of their house about 1940 they moved to Thornbury.  Stanley was a carpenter who worked in Bristol.  They are listed as living in the house in the 1958 electoral register, but do not appear to be living in Thornbury in the 1965 register.

Their daughter, Barbara Jessie Ada, married John Poole Lewis, the son of Arthur Conway Lewis on 19th August 1950.  The newspaper report of the wedding says that Barbara had been stricken with infantile paralysis 14 months before the wedding and she was paralysed from the waist down.  With a lot of support from the BRI, her family and fiancée she managed to walk again after a few months and to return to work.  On the morning of their wedding Cwmammon Institute Silver Band stopped at Thornbury on their way to a concert at Bridgewater and on hearing of the forthcoming wedding they played the Wedding March, Rural Wedding March and Auld Lang Syne outside the bride’s house.  The photo on the right was taken at the wedding.

We have also been told that Fred Smith, a teacher in the Council School lived in the house.  We haven’t been able to trace when he lived there from the electoral registers.