The house was built before 1840.  In the Tithe Survey taken in 1840 it was part of Plot 330 which seems to comprise 3 houses and gardens owned by William Rolph and occupied by James Aberhall, Richard Gale and James Williams.  We are assuming that James Aberhall occupied number 5.

This may be the same person as the James Aberhall mentioned in the transcription of the Tithe Survey.  Henry James Abrahall was born in Hasingham, Herefordshire about 1789.  He was a journeyman watch and clock maker.  By 1832 he had come to Thornbury where on 31st December he married a widow, Sarah Smith.  Sarah was born in Thornbury about 1799.  Her maiden name was Barge and on 24th June 1821 she had married John Smith, a widowed cordwainer.  John and Sarah had one son, John, baptised on 23rd July 1826.  By this time, John (senior) had died and he was buried on 13th April 1825 aged 37 years.

On 31st May 1848 James Abrahall  (as he seems to have preferred to be called) was found guilty of feloniously obtaining a gun by false pretences.  He was sentenced to two months hard labour.  James was described as being a Thornbury clock and watch maker for Mr Collings for 20 years .  It notes that he was a native of Herefordshire aged 65, height 5ft 4.5 inches, dark hair, blue eyes, high forehead, and fresh complexion with large cut on left wrist. Apparently he was also corpulent with a hairy chest.

On 5th August 1854 Sarah was charged with ‘feloniously stealing 11lb of potatoes the property of Nicholas Grove’.  Sarah pleaded guilty and sentenced to 4 months hard labour in the penitenitary.  She was described as a laundress aged 55, height 5ft 4.75 inches, thin dark hair, dark eyes, long visage and brown complexion – upper part of teeth gone, moles on neck, scar across left eyebrow and mole on centre of brow.  She was a native of Thornbury, married with three children.  James was also charged on the same day, in his case for receiving two baskets of potatoes knowing the same to be stolen.  He was found not guilty and released on 20th October.

In 1861  James and Sarah were living in the house on their own.  It is possible that they moved as James Abrahall is shown in the 1867 Rate Book as living in a house owned by John Honeyborne, thought to be 10 Rock Street.  Henry James Abrahall died and was buried on 11th April 1869 aged 82 years.  Sarah was died in the infirmary at the Thornbury Workhouse on 11th January 1871.  The workhouse records shows her age as 70, but the death registration recorded her age as 69.

We cannot tell who is occupying the house in the 1871 census.

George and Jane Spill – lived in the house between 1876 and their deaths in the early 1900s.  Click here to read more about the Spills 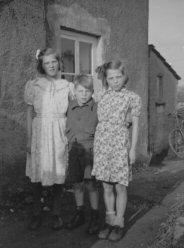 Harold and Irene Barton – moved from their house in 1 Crispin Lane to live in 5 Upper Bath Road from about 1933 to early 1950s.  The photo on the right shows Hilary, Gerald and Margaret Barton.  Click here to read more

In 1948 the three houses in the row (including number 5) were bought by Charlie Pitcher from Frances John Yates who lived in Shifnal (Shropshire).  Charlie sold the house to Mr Huntingden who worked for the Thornbury Rural District Council who in turn sold the house to the Coles who actually moved into the house.

When the house was put up for sale for £2,500 in 1950 it was described as a modernised semi-detached house.  It was then referred to as ‘3 Upper Bath Road’.  The property had an entrance hall, lounge, dining room and large kitchen on the ground floor and three bedrooms and a boxroom or small bedroom and bathroom and WC on the first floor.  There was also an outside WC and coal house.

Frederick and Mary Cole – moved into the house in the early 50’s after the Bartons moved to Bath Road.  We understand that Fred sold cash registers for NCR.  Mary was a teacher at the Council School and she later became headmistress at Pilning School.  The electoral registers show them there in 1954 and 1958, but not 1965.  Fred and Mary had two daughters, Margaret and Barbara who both went to the Grammar School.  By 1965 the Cole family had moved to The Meadows, Hackett Lane.

We understand that after the Coles, the house was occupied by Donald and Renee Lumbard.  Donald was employed with the building of Oldbury Power Station.  After they left it was empty for a long while and bought by the District Council and then bought by Beryl O’Hare who came from Tytherington, but had been living in Streamleaze Caravan Site.