The house which was number 9 is very distinctive because of the ’rounded end’ of the house.  The 1840 Tithe Map clearly shows that this part of the house was not built at that time.  We are guessing that James Williams may have been living in number 9 which may have been built shortly after the map was drawn.

In recent years the house which was number 9 has been combined with the house which was number 7.  We know from earlier records, and by looking at its construction, that the row of houses now known as 5 – 9 has been divided in a number of different ways in the past, and the house numbering has changed several times which makes it all very confusing!  It is too complicated to try and describe these changes in a simple and meaningful way on the website.  We have had great difficulty in identifying the other families associated with the house, in the 19th century census 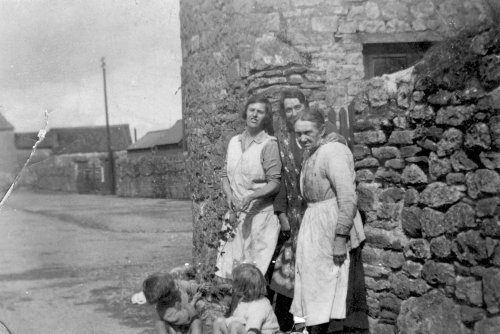 The above photo taken about 1930 shows members of the Collins and Screen families outside number Upper Bath Road.  In the distance can be seen the entrance to the Town Market.  The photo shows left to right Edith Collins, Ruby Screen and Eliza Collins and children, Jeff Screen and Gwen Collins.  Gwen Collins lived in the house since the time she was born in 1928 up to her death in 2014.  Her father and grandfather lived there from before the 1891 census.  Thomas Collins was listed as renting out the cottage in the 1887 rate book.  Click here to read more about the Collins family

James Williams – the 1841 census shows James Williams was an agricultural labourer.  He died and was buried on 8th December 1850 aged 78 years.

George Baker – the rate books of 1876, 1880 and 1885 show that George Baker lived in the house.  The 1871 census  shows he was living there as an agricultural labourer aged 58 living with his wife, Elizabeth, aged 61 from Malmesbury in Wiltshire.  Also living with them was Sarah Holder, Elizabeth’s unmarried daughter aged 36 who was a general servant born in Cromhall and her son, Charles aged 4 who was born in Thornbury.

The 1881 census shows that George Baker was an agricultural labourer aged 65 born in Crossways living with his wife, Elizabeth aged 74 and their grandson, Charles William Holder aged 13 from Thornbury.  George was baptised on 14th February 1813, the son of William Baker, a labourer and his wife, Susanna.  In 1841 he was living with his parents in The Hackett.  By 1851 he was still there living with his widowed mother.  On 12th June 1853 George married a widow, Elizabeth Holder, the daughter of William Brown, a labourer.  In 1861 George and Elizabeth were living at Eastland Hill with a grandson, John Holder, aged 4, who was the son of Elizabeth’s daughter, Sarah.  George died aged 68 years and was buried on 21st May 1888.  Elizabeth died aged 84 in 1892.

The Collins family – three generations of Collins family have lived in the house from before the 1891 census up to the present day.  Click here to read more