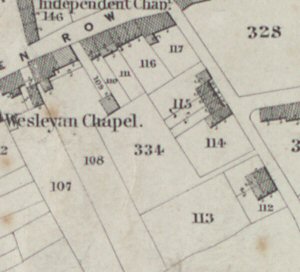 We are grateful to South Gloucestershire Council for allowing us access to the deeds and documents that relate to a large close of two acres of land bounded by Chapel Street to the north and Upper Bath Road to the East.

We know a lot now about the earlier history of this plot before the time of the Tithe Map of 1840 which is shown on the left and explained below.  Click here to read about this area in the early eighteenth century

This close (of two acres) was acquired by Matthew Mills from William Taylor in 1811.  The land was described in many later indentures as a close of land “formerly called the paddock since planted with fruit trees and known as the Orchard.”

Matthew Mills appeared to live in a house on this property, probably on what is now Chapel Street.  This house was occupied in the late eighteenth Century by Susannah Ward and then by Thomas Walker, Joseph and Hannah Sherman (or Sheerman) and then their son William.

Matthew eventually divided this house into two and added a butcher’s shop and stable.  By 1824 it was described as three messuages or tenements.

Over a period of time in the first quarter of the nineteenth century Matthew Mills divided the land into smaller sections, most of which he sold off or were sold after his death and that of his wife.  These transactions are reflected in the Tithe Apportionment Map drawn up between 1838 and 1840.

Numbers 110 and 111 in the Tithe Map were owned by Ann Gayner and occupied by Samuel Harris and John Cullimore.  These were sold by Matthew Mills in indentures of lease and release dated 24 and 25th March 1819 to Charles Gaynor.  The two houses built on the land before 1840 later became known as 8 and 10 Chapel Street.

Number 116 was owned by Robert Ann and occupied by John Wilson, John Beale, Matthew Mills junior and William Lippiatt.  This property was bought by William Ann on 3rd May 1833 from Thomas Trayhurn and John Williams the trustees of the estate of Matthew Mills.  Houses built on this property later became 12 and 14 Chapel Street.

Number 117 was owned by John Gough and occupied by himself.  We are still researching as to how this was acquired from Matthew Mills.

Number 115 was owned by Robert Ann and occupied by William Walker and Isaac Sly.  The property was bought from Matthew Mills by William Ann in 1833 and sold by him to Robert Ann by lease and release of 6th and 7th May 1833.  The two houses on this plot at the time of the Tithe Survey later became number 6 and 8 Upper Bath Road. Two other houses were built after 1840 which became known as 2 and 4 Upper Bath Road.  Click here to read about 2 – 8 Upper Bath Road

Number 114 was owned by “John” Dorney and occupied by John Greenwood.  This property was bought by William Slain from Matthew Mills by indentures of 5th and 6th July 1821.  It was sold to John Lippiatt in 1827 and “Thomas” Dorney in 1830.  We cannot explain the discrepancy in the first name.  The house built on this property eventually became 10 Upper Bath Road.

Numbers 112 and 113 were owned by David Greenman and occupied by himself and Job Greenhill (possibly Greenman).  This property (comprising two pieces of land containing 16 and 36 perches) was bought from Matthew Mills by Luke Trayhurn on 2nd June 1814 and was then bought by William Clark on the 25th March 1820 before it was acquired by David Greenman.  Houses built on Plot 112 later became 12, 14 and 16 Upper Bath Road.

Number 334 was a garden owned by John Liddiatt and rented by Thomas Farley.  It was acquired by Charles Gayner by lease and release of 24 and 25th March 1819 and sold by Charles’s widow Ann Gayner to John Lippiatt in 1835.

Buildings on number 108 on this map later became the Wheatsheaf public house. We have no record at this stage to show whether this property was part of the Orchard or the Paddock.