in WWl and WWll

FIRST WORLD WAR
During the First World War German prisoners were held at a camp at Marlwood.  On 18th May 1918 the Council medical officer reported that there were 42 prisoners in the camp at Marlwood Grange.  The local population were disgruntled to read that the medical officer had reported that the rations allocated to the prisoners were greater than their own.  We have found one reference in the newspapers to a prisoner escaping.  He was George Hennecke, a German subject, aged 21 wearing a brown tunic, blue trousers and a grey overcoat.

There was also another camp at Tytherington Stone Quarries where some 50 interned aliens, chiefly Austrians, were employed.  These men had to be engaged on work of national importance, and were allowed a certain amount of liberty. 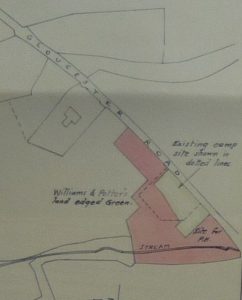 SECOND WORLD WAR
During the Second World War there was a small camp holding about 20 or 30 Italian prisoners of war located in Gloucester Road near The Coombe.  The field that the camp occupied has been variously described to us as the “10 acre” or “20 acre” field.  It was owned by Mr Cullimore and some locals can recall haymaking there.  (The plan on the right was made for a building application for a new pub to be built on the site of the camp in 1959.  It was still being referred to as ‘The Camp’.)

A letter from Spicers (builders) Ltd of Worcester dated 18th March 1943 who were contracted to install the drains there mentions that the camp was to be erected by the Prisoners of War themselves and suggests that the work done would be of very poor quality.

The Italians worked on local farms.  Sadly the Western Daily Press of 1st September 1945 reported that one of them was working on a farm at Marlwood when he was very severely injured when a colt bolted and a farm trolley he was pulling ran over the man.  The prisoner was named as Alfredo Pieraccini aged 36.  He had spinal damage and injuries to head and face and was taken to Bristol Royal Infirmary.

We have been told one odd story about the prisoners.  Apparently when they were allowed to go out to work on farms they had to have POW clearly marked on their clothing and it seems it was not unknown for this to be done with toothpaste!

We are not sure when the Italian prisoners were released from this camp to go home.  We know from reports in the Gazette that in June 1946 a report mentioned that the Gloucestershire farmers were concerned that POWs were ‘making articles in their spare time and selling these to the public’.  It was pointed out that such purchases were against the law and both purchaser and the POW could be penalised and that encouragement of the traffic could lead to petty pilfering by POW in order to obtain the materials they needed.  In another report dated August 1946 there were concerns that prisoners generally had not been allowed to go home, suggesting that it was because they were proving too valuable as a cheap form of labour.  We prepared an article for the local BS35 magazine about this POWs.  Unfortunately this article has been created in PDF format ad may not be suited to smaller screens.  Click here to read the article

We are also the memories of local boy, Jack Pridham, who described the impact of the camp and the prisoners in the town.  We have grouped these memories together with others relating to the evacuees who came to Thornbury.  Click here to read more

We understand that after the Italians vacated the camp, it was used as a hostel for displaced Polish persons.  Even in the early 50’s it was known as the ‘Polish Camp.