Whilst the soldiers and sailors were away fighting, the people at home in Thornbury also began to see changes in their lives.  Although better off than people living in the cities, as the War went on food and coal became in short supply.  We have written about the these problems on a separate page called ‘Feeding Thornbury’.  Click here to read more

The people of Thornbury were also preparing themselves for the possibility of an invasion or an attack from the air.  The Gazette of the 6th March 1915 announced that “Four sharp blasts by the hooter at Mr. Cullimore’s Mills will be sounded in the unlikely event of any hostile aircraft approaching the Thornbury district.”

A lot of special measures were introduced for the protection of the country under what was called “the Defence of the Realm Act. ”  These were not popular and often must have seemed rather petty: for example we have newspaper reports to the effect that Ernest Exell and Alfred Cook were charged with not carrying front and rear lights on their carts.  There were very many offences of this type that appeared in the newspapers at this time.  The Act (known as DORA) was not loved either by the public nor the local magistrates.  The general feeling was probably summed in a Gazette report of November 1918.  At the Thornbury Petty sessions the chairman Mr Russell Thomas was quoted as saying “if it had not been for the Defence of the Realm Act ….. which had been the means of bringing to the court worthy citizens who had never been before and probably never would again – there would have been almost nothing for them to do.”

Not all of the serving soldiers had left the area.  Some were home on leave or recovering from injury, but others seemed to be waiting for deployment or re-assignment overseas.  A report in the Gazette dated 24th June 1916 mentions that “some of the soldiers have obviously been given unpaid leave to for one month to help bring in the harvest half a dozen of them were working in the Thornbury district and had done very well.  Many of them are small holders or farmers’ sons and only a few had little or no training on the land”.  The paper pointed out that “The wages many of them earned before joining the army bear grotesque relations to those now being paid to compensate them them for loss of pay rations and a straw mattress on the floor”. 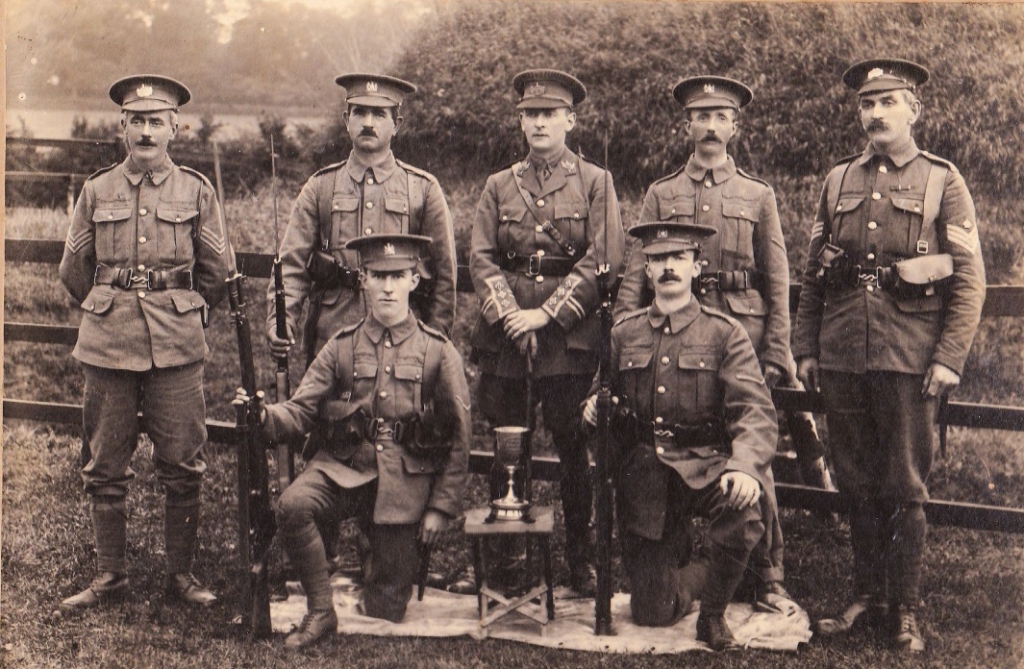 Some of the local men wanted to do more to defend their country, should the unthinkable happen and Britain be invaded.  The photograph above shows members of the 1st Volunteer Battalion of the Gloucestershire Regiment in 1918.  These men were the winners of the Assistant Adjutant’s Cup, which appears to have been a shooting award.  The names of the men were written on the back of the photo.  From left to right they are (back row) A. H Wilkins, P. N. Wills, J. G Wicks, Mr. Perry, Mr Heard, (front row) Mr Hall and unknown.

The Thornbury Company was C Company, part of the Berkeley Vale Battalion.  Based on the age and names of those involved, the men were drawn from those too old or unfit to serve in the regular services.  The members book held in Gloucester Archives appears to imply that the Unit was formed on 7th July 1916 when a large number of local men enrolled in the unit and the newspaper report referred to below indicates that they were trying to provide uniforms for the members in September 1916.  However a similar unit known as the Thornbury Volunteer Training Corps existed during the early years of the War.  Although we haven’t seen the documents, Gloucester Archives had a record of an appeal for funds in 1915 to support the volunteers who had their headquarters at Thornbury Castle.  We know that when a local man, Francis J Williams, applied for exemption from service in the regular army he mentioned that he was a member of the Thornbury Volunteer Training Corps.  On June 3rd 1916 the members of the Thornbury Volunteer Training Corps were given guard duty on a section of the railway which was allotted to the Berkeley Vale Battalion Gloucestershire Volunteer Regiment.

Note – a similar unit known as 1st Gloucestershire Regiment (City of Bristol) Rifle Volunteers Thornbury Detachment had been set up in 1886 but this seems to have been disbanded in 1896.  Click here to read about the earlier unit

On the 2nd September 1916 the Gazette reported that the volunteers met at the Castle Hotel, Thornbury under the chair of Canon Cornwall to consider the question of uniform.  There were some 50 men present.  It was pointed out that ‘having regard to the important work now entrusted to the Battalion in conjunction with the other three Gloucester Battalions, the men ought to be fitted out in such a way as to give them a proper status for carrying out their duties.  The members of the Company subscribed annually to the funds, but were not in a position to find the amount necessary to provide uniforms which cost £100.’  It was resolved to make a public appeal for funding.  The report mentioned that 54 men had taken the oath and were ready to serve in the advent of invasion or other national emergency.  The original strength of Corps was 70.  Parades had been suspended during the summer months as the men were urgently required for haymaking and harvesting.  Drills had just re-commenced and a Battalion Field Day was organised at Dursley on 3rd September. when 30 members of the Thornbury company were expected to attend. 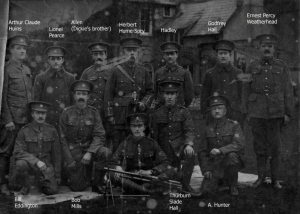 Click on the thumbnail image on the left above to see another photo of a group of volunteers.

We have created a table of the details shown in the Members  Book of the Volunteers during the period 1916 to 1818.  The table is presented in PDF format and the size of the table makes it difficult to read on smaller screens.  Click here to read these details