According to the National Archives stats in 1914, the British Army was relatively small, consisting of just over 730,000 officers and men.  One-third of them served in the regular army with the greater part stationed in reserve formations, the most notable of which was the Territorial Force.

By the end of World War I almost 1 in 4 of the total male population of the United Kingdom of Great Britain and Ireland had joined up, over five million men.  Of these men, 2.67 million voluntarily enlisted and 2.77 million as conscripts. 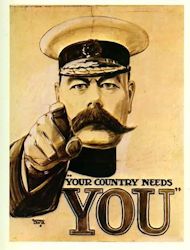 At the beginning of August 1914 Parliament issued a call for an extra 100,000 soldiers.  By the end of September, over 750,000 men had enlisted; by January 1915, a million.  The reasons for their enlistment cannot be pinned down to a single factor; enthusiasm and a sense of patriotism certainly drove some, while for others unemployment prompted enlistment.  Some employers forced men to join up, while occasionally Poor Law Guardians would also refuse to pay support for fit military-aged men.  The timing of the recruiting boom in the wake of the news from the Battle of Mons, though, suggests that men joined knowing that the war was dangerous and indeed many joined precisely because it seemed to be a threat to their home, district and country.

On 22nd August 1914 a report appeared in the Gazette saying that recruitment was taking place in Thornbury and District for Lord Kitchener’s Second Army.  John Harrison Bond, a retired naval officer of Castle Street was the local recruitment officer.  The men being enlisted at that time had to be between the age of 19 and 30, unless they were old soldiers who could be up to the age of 42.  No men already serving as Territorials would be accepted.  Enlisted soldiers were to serve for the duration of the War or if they chose for a period of 3 years and were told they could chose almost any corps they liked. 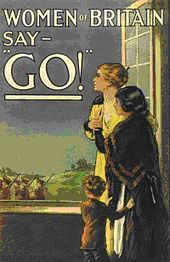 We don’t know how many Thornbury men responded to the initial call for volunteers but we know from the newspaper reports of individuals and their service records that a great many did.

In January 1915 the Gazette newspaper published a Roll of Honour listing the local men and women serving.  The list included 148 names, of which 18 were serving in the Royal Navy, 31 were ‘on active service in the Army’, 97 were ‘men in the H. M. Forces but not yet on active service’ and two women were Red Cross Nurses in France.  A similar list was published in December 1915.  This included 232 names, of which 23 were in the Royal Navy, 205 were in the Army and 4 were nurses.  Click here to read a summary of those two lists

However as losses mounted during 1915, the demand for extra men went up and recruitment of volunteers became more difficult.  A National Registration Act was passed in 1915 which created a register of the men still available and they were targeted in a number of ways.  Advertising for recruits increased and these focused on the tales of German atrocities and the threat of shame in not volunteering.

In May 1915 a detachment of the 6th Gloucestershire Regiment came to Thornbury on a recruitment campaign.  The detachment with regimental band marched from Berkeley to Thornbury.  At 6pm the band played on The Plain and appeals were made for recruits.  In the evening a Costume Concert Party was held at the Cossham Hall and further appeals were made.  The following day the detachment marched through Crossways, The Hackett and Grovesend to Tytherington and returned to Thornbury in the afternoon where they were entertained to tea by Lady Constance Howard at Thornbury Castle.  At 5pm athletics sports took place at the Grammar School field and music was played by the band.  The following day the detachment paraded before marching to New Passage.

Finally in January 1916 the Military Service Bill was introduced which provided for conscription of single men aged 18 to 41.  In May 1916 this was extended to married men.  These measures had little impact on the numbers being recruited as men in some occupations were needed for war work and many of the others were not considered fit for the fighting.

In December 1916 the Gazette published a list of Thornbury men and women sent parcels at Christmas.  Each parcel contained one tin of gingerbread biscuits 50 cigarettes, one khaki handkerchief, and one tablet of soap provided out of the money subscribed and in addition one pair of socks made and given by the ladies knitting party in connection with the Thornbury working party.  The lists includes 206 names, of which 15 were serving in the Royal Navy, 118 serving overseas in the Army, 70 were on Home Service and 3 were nurses on active service.  Click here to read the names on the 1916 list

A similar lists was published in December 1917 which gave the names of 251 men of which 19 were in the Royal Navy, 166 serving overseas in the Army and 66 on home service.  Click here to read the names on the 1917 list

Another factor was that the legislation gave men, and their employers, the right to appeal against their conscription.  These appeals could be made on the grounds of work of national importance, business or domestic hardship, medical unfitness, and conscientious objection.  A very large number of men appealed to Military Service Tribunals for exemption from conscription.  Most men were given some kind of exemption, usually temporary (between a few weeks and six months) or conditional on their situation at work or home remaining serious enough to warrant their retention at home.

In Thornbury we have copied the applications held by Gloucester Records Office (ref D3789 Boxes 1 and 12).  We are not sure if our list is complete.  We understand from the Public Records Office website that in 1921 the Ministry of Health decided that all papers relating to individual cases of exemption from National Service should be destroyed, so there may have been more applications.

The records held by the Gloucester Records Office show that most men in Thornbury were given temporary exemption to allow them (or their employers) time to make alternative arrangements for the men to join the fighting and these men did serve.  Other men were exempted for physical or medical reasons.  Some applications were rejected and the men made to join their units.  Click here to read a summary of these applications

Only around 2% of those appealing against conscription were Conscientious Objectors who claimed the right to refuse to perform military service on the grounds of freedom of thought, conscience, and/or religion.  Around 7,000 men were granted non-combatant duties, while a further 3,000 ended up in special work camps and 6,000 were imprisoned.

We have found only one record of a Thornbury man applying for exemption as a conscientious objector.  We understand from the Public Records Office website that most records of objectors have been destroyed so this might explain the absence of any other information.