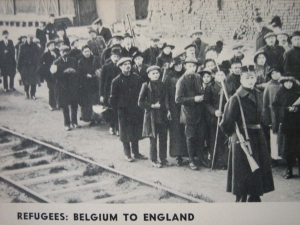 Almost a quarter of a million Belgians fled to England after the German invasion of 1914.  Relief for them was largely the work of private charities.  The Belgian Relief Committee in the Thornbury area was chaired initially by George Bank Jenkinson.

In October 1914 the Western Daily Press reported on a meeting in the Castle Temperance Tavern to decided how the parish could cope with Belgian refugees, should they arrive in the area.  Mr John Cullimore of Chester had kindly offered Morton House for the refugees on condition that any damage be made good and the place would be cleaned after they left.  The committee of Major Wrenn, Dr Rhind, Dr Williams, George Whitfield, George Tucker, Mrs Cornwall, Mrs E Cullimore, Mrs R. F. Staley and Miss Bennett decided that they could cope with three families with five or six in each family.

We have found a very few records in Gloucestershire Archives that relate to the arrival and settlement of these refugees.  A letter dated 9th November 1914 from Olveston to H. P. Thurston refers to nine refugees at Pilning and four at Aust.  The letter also refers to a group at Tockington Court who were cared for by Captain Salmon.  Another letter dated 2nd November shows how organised and willing to help Thornbury was, even at this early stage.  A group had already organised a “Thornbury Refugees Committee” who were eager to offer the Belgians hospitality.  The reply from London via the Gloucestershire County War Relief Committee was that there were as yet no refugees but that large numbers were expected shortly.

Despite the concerns about large numbers the Western Daily Press of November 13th 1914 said that a dozen Belgian refugees had arrived in Thornbury and were taken to their new home at Morton.  The house was said to be “well-furnished and everything necessary for their comfort has been provided.”

We know a little more about the refugees who arrived in the area from the records of the Council School (later Gillingstool Primary School).  By Christmas 1914 it was being discussed which school the Belgians should go to.  It was decided that they should attend the National School (now St Mary’s).

It seems likely that those who came to Thornbury may have come partly because of the work of Mrs Clarinda Staley (nee Sindry), the wife of Robert Staley who farmed at Park Mill.  Mrs Staley had trained as a nurse at Guy’s Hospital before her marriage and worked in London and Paris.  We understand that she was one of those asked by the government to help with the problem of displaced Belgians and after the war she was given a special commendation by the British Government Southern Voluntary Fund.  Apparently much of the money for this fund was raised by Australian farmers under Sid Kidman who was knighted later.  Mrs Staley died in Launceston, Tasmania in 1943.

We have a letter from one of these refugees written to Oliver Higgins by Peter Vercammen (or Vencammen) of Mechelen who came to Thornbury as a refugee when he was only 11 years old.  The letter written by Peter so long after the war is a sad one.  Aged 29 at the time of writing the letter, he obviously wished he was back in Thornbury.  He had served as a soldier, during which time his wife had left him.  He was now finding it hard to get regular work.  His father had been out of work for three years and the family depended on his mother’s job in the factory.  Peter’s sister had come to Thornbury too and she was said to have kept in touch with Mrs Cullimore.  The South Gloucestershire Chronicle of January 7th 1916 reported that the Vercannons (or Vencammens) lived first in Morton and then in a house provided by Edmund Cullimore and were working for him.

The South Gloucestershire Gazette also reported that after the Vercammen family left the house in Morton in June 1915 they were replaced by another family of refugees called De Luis.  Work was apparently found for the father and son on Garretts farm but after a few weeks they asked to go back to Belgium!  They eventually left Morton and got as far as London where the authorities prevented them from leaving the country.  They then asked to return to Thornbury.  After their departure only three Belgians remained in the Morton House.