The following report was published in the Thornbury Gazette on 17th December 1921 under the heading ‘Unveiled at Thornbury Grammar School’:

‘Yesterday week the tablet was erected as a memorial to the old boys who gave their lives in the war was unveiled and dedicated at Thornbury Grammar School.  The tablet is made of oak surmounted with the school crest beautifully carved, while with the names of the fallen, seventeen in number are inscribed in gold lettering on a black background; it is placed in the school assembly room.  In addition to the masters and scholars there were present the parents of the fallen, the Governors of the school and subscribers towards the memorial.

Canon Cornwall, chairman of the Governors, officiated at the short dedication service.  After the hymn “Supreme Sacrifice” had been sung and a short address given by the headmaster, Mr C. H. Ross, the tablet was unveiled.  Canon Cornwall in a short address to the scholars, said the memorial would remain as a permanent reminder to them of their duties to their King and Country.  Although it was extremely unlikely that their services would be needed in a military sense, yet it was just as important that they should fit themselves for whatever contingency might arise, always remembering that those to honour whose memory they were now gathered put the call of their country and Empire first and thought nothing of themselves.  The hymn “Oh God, our Help in Ages Past” was then sung and the service concluded with the Benediction and the singing of the National Anthem.’

The names inscribed on the tablet are as follows:

In the case of the boys who lived in Thornbury it is possible to click on their names (if in bold font) to read more about them and their families.

Of the others, we understand that:

H. Anstey – this was possibly Henry Anstey from Tortworth.  Henry was born in 1887, the son of Alfred Henry W. Anstey, a farmer and his wife, Mary L.  In 1901 they were living at Buckover.  In early 1911 Henry married Dorothy Lydia Joslen who came from London.  The 1911 Census shows them living in Falfield where Henry was a farmer.  Henry was serving as a temporary Second Lieutenant in the Rifle Brigade (The Prince Consort’s Own) when he was killed in action on 11th April 1917.  He is listed on the Tigris Lane Cememtery Memorial at Wancourt.  The probate record shows that their address as the Elms, Tortworth.

W. C. Bruton was Wilfred Charlie Bruton, born in 1889, the son of James Bruton, a carpenter and his wife, Hannah Caroline Bruton of The Cross House, Hill.  Wilfred was admitted to the Grammar School in 1902.  He was a bank clerk in the 1911 Census.  Wilfred was a Lance Corporal in the 12th Battalion of the Gloucester Regiment when he died in action in France on 6th May 1917.  He is mentioned on the Arras Memorial.

E. R. B. Clough – Ernest Rowan Butler Clough was born in Ireland on 11 June 1894.  He was the son of Lieutenant Colonel Alfred Herrick Butler Clough of the Royal Munster Fusiliers and his wife, Gertrude Matilda of 34 Royal Crescent Clifton, Bristol.  Ernest was admitted to the Grammar School in 1906.  The 1911 Census shows the family living at The Grange, Alveston.  In 1914 he was awarded a temporary commission, and from 1st July 1915 Ernest was commissioned into the 9th Devonshire Regiment but was later attached to the 11th Battalion Durham Light Infantry.  He was serving as a Second Lieutenant when he died of shrapnel wounds on 27th June 1916.  He was buried at the Brandhoek Military Cemetery in Belgium, but his name is also listed on the Alveston War Memorial and the war memorial at St Paul’s Church, Clifton.  Further information is available on the website of the Durham Light Infantry (search for the name of Clough).

A. S. Fisher – Arthur Samuel Fisher was born in Bulwell, Nottingham in 1899.  He was the son of Samuel Fisher and his wife, Emma.  In the 1911 Census the family lived at Oldbury on Severn.  The census shows Samuel was a shopkeeper and police pensioner.  Arthur was serving as an Ordinary Seaman with the Royal Navy Volunteer Reserve.  He was based at the Royal Navy Depot at Crystal Palace.  His service records show Arthur died ‘from disease’ on 4th January 1918 .  His death was registered in the Croyden area and he was buried at St Arild’s Church, Oldbury. 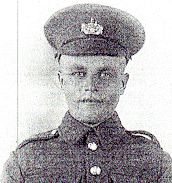 J. Ford – (shown in the photo on the right) – Joseph Ford who was born in Kingswood, near Wotton Under Edge about 1895.  He was the son of William Jenkins Ford, a farmer and his wife, Mary.  In the 1901 and 1911 Censuses the family lived at Hill.  Joseph appears to have enlisted in the Gloucestershire Regiment, but he was serving as a Rifleman in the 16th Battalion of the Kings Royal Rifle Corps when he died of wounds on 9th February 1917.  He is listed on the Memorial at the Bray Military Cemetery in Flanders.  The address of his parents was given as Brick House Farm, Hill.

V. Gazzard – Vincent Gazzard, born in 1894 was the son of John William Gazzard, a farmer from Hill and his wife, Ellen. Vincent was serving as a Private in the 1st/5th Battalion Gloucester Regiment when he was killed in France on 23rd October 1918.  He is mentioned on the Vis-En-Artois Memorial. (Note – there is another Victor John Gazzard born in 1892 who was admitted to the Grammar School in 1905.  He appears to have survived the War and died in Thornbury in 1964).

C. W. George – Charles Watts George was born in 1889 in Chew Stoke in Somerset.  He was the son of William George, a farmer and his wife, Julia.  In the 1901 Census they were living at Stock Farm in Oldbury.   Charles initially joined the Royal Gloucestershire Hussars, but in 1910 he transferred to Grenadier Guards where he stayed until his service expired in 1913.  When War broke out in 1914 he rejoined the 2nd Battalion Grenadier Guards as a Private.  By September 1914 he was in France with the BEF.  On 6th November 1914 the Battalion was defending a trench at Zillebeke under sustained and accurate German artillery barrage and under orders to defend the line at all costs.  Charles was killed on 7th November 1914.  He is mentioned on the New Irish Farm Memorial in Flanders and on memorials at Oldbury, Littleton (where his fiancee Dorothy Mary Cornock, lived) and the Grammar School.

E. Herbert – Ernest Henry Herbert was born in Almondsbury in 1897.  He was the son of Henry Charles Herbert, a brick burner and his wife, Sarah Ann. The 1901 and 1911 Censuses show the family living at Townsend, Almondsbury.  Ernest was serving as a Private in the 20th Battalion of the Durham Light Infantry when he was killed in Flanders on 22nd September 1917.

C. Pearce – we assume that this is Edward Charles Henry Pearce was born in Winford, Somerset in 1883.  He was the son of Henry C Pearce of Winford and his wife, Eliza Jane who was born in Otago, New Zealand and the brother of Dudley Pearce (see below).  Edward was working on his father’s farm in the 1891 and 1901 Censuses, but after that he emigrated to to Australia.  On 17th October 1914, whilst in Roma, Queensland, he enlisted in the 2nd Light Horse Regiment.  Edward joined the Unit in Egypt where they left their horses and went on to land at Gallipoli on 15th May 1915.  Edward died there on 7th August 1915.  His name is inscribed on the memorial at Quinn’s Post Cemetery above Anzac Beach.

D. Pearce – Dudley Hogarth Pearce was born in Winford, Somerset in 1884.  He was the son of Henry C Pearce of Winford and his wife, Eliza Jane who was born in Otago, New Zealand and brother of Charles Pearce (see above).  By 1891 the family had moved to Morton where Henry was a farmer.  The 1901 Census shows they had moved again, this time they were in Hayward Farm, Elberton and Dudley had begun to work with his father on the farm. They were still there in the 1911 Census.  Dudley enlisted in the Royal Gloucestershire Hussars in Bristol in 1914.  In August 1915 Dudley’s unit moved to Gallipoli and on to a night landing at Suvla Bay where they came up against the Turks.  On 28th August 1915 Dudley was killed as a result of particularly heavy shelling by the Turks.  He was initially buried in a grave where they fell, but later the remains were removed to Green Hill Cemetery close to where he died.

The tablet memorial was originally erected on a wall in the assembly hall, but was later moved to the quadrangle at the Grammar School.  As at 2012 a tablet is still there although it looks very different from the description of the original and a service was still being held each November in memory of the boys who died.