The Industrial Exhibition of 1885 in Thornbury 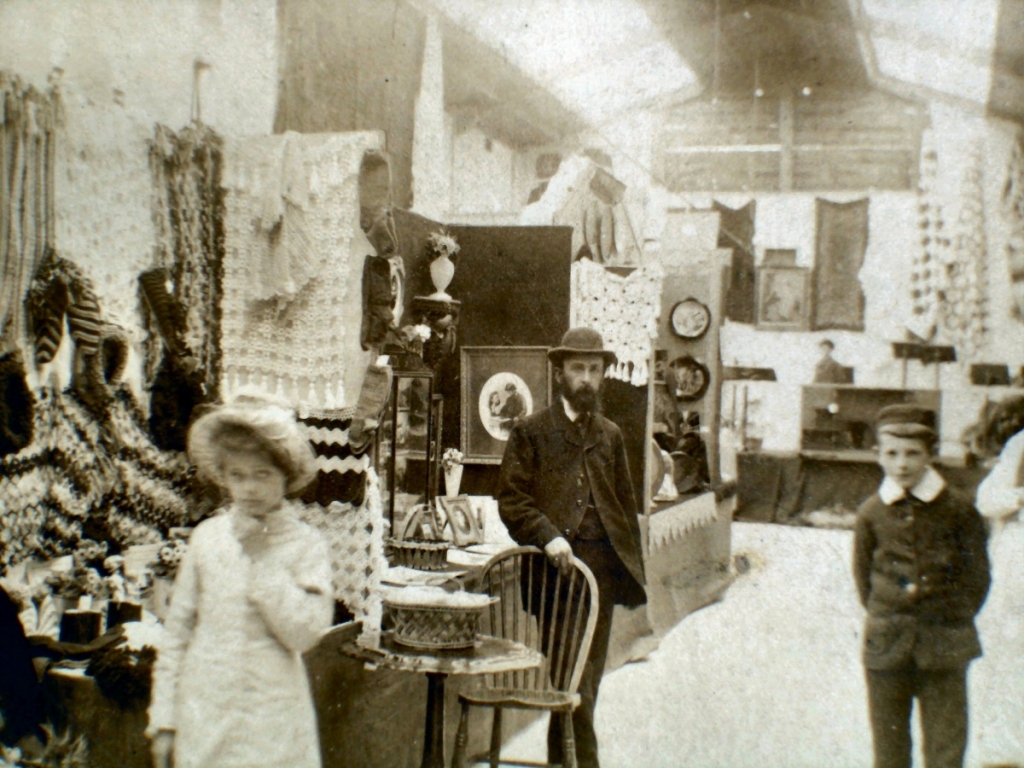 The Industrial Exhibition in the Tennis Court 1885

This photograph shows the Industrial Exhibition that took place in Thornbury in April 1885.  It was held at the Tennis Court which was a building in the grounds of Thornbury Castle.  It was an area between the Castle’s outer and inner walls which had been roofed over and presumably used at some time for “Real Tennis.”  In the late 1800s it made into a meeting room much used by Thornburians, at least until the Cossham Hall was opened.  It was a long narrow room and seems to have had another room described as a reception room.  Traces of the rooms can still be seen.

An article in the Bristol Mercury about an event in this building in January 1884 had the following description;-

“the Tennis Court carpeted and decorated with tropical plants and flowers and dressed with flags made a capital concert room. It was built by the present owner of the Castle, Mr E Stafford Howard MP, who a few years ago had it constructed at the boundary of the outer court, now forming a spacious quadrangle, intersected by the main carriage drives and footpaths. The entrance is at the extreme end of a narrow glade, shut in by the old battled walls – now partly in ruins – which the great Duke of Buckingham intended to have formed part of the extensive barracks he had planned for the accommodation of his martial retainers.”

The Industrial Exhibition of 1885 showed a very wide range of trades and crafts in Thornbury.  As explained on another page, Alexander Sutherland was the only professional photographer in Thornbury at this time and he had a stand at this event.  A newspaper article of 21st April 1885 said

“Mr Sutherland has a stand of photographs, among them being a group of county cricketers and the whale stranded at Littleton in the new year.”

A close examination of this photograph shows that the man in the centre is standing next to a display of photographs and frames.  We believe it is very likely that the man is Alexander Sutherland himself.  He would have had two children, James and Emma, at this time.  It is possible that the boy and girl in the photograph are his children although they may be too young.

The parish magazine of June 1885 reported that the exhibition was very popular;

“The Exhibition remained open for the week and many hundreds of visitors daily came to see it, the Tennis Court and large Annexe being in the evenings almost inconveniently crowded. Notwithstanding the pressure however and the difficulties of locomotion, the utmost order and good humour prevailed.  The space at command was l