Bath Road in Thornbury  is now mainly an access road for the car parks and to Turnberries, the community centre built on the site of the old cattle market.  Its history is rather more interesting.

The earliest records relating to this area that we have found so far are dated in the first half of the 1700s and refer to  “all that toft or ruinous cottage and one small parcel of ground thereunto adjoining now being in an orchard and one close or paddock of ground to the same also adjoining and belonging commonly called Blayes containing in the whole by estimation one acre.”  Read more about Blayes

During most of the 1800s and early 1900s there were ten houses in what eventually became known as ‘Bath Road’.   Now the ten old houses have all gone, although at the lower end of the road there are the 24 houses built by the Council in the 1930s on what was called ‘Market Site’ and there is also the new housing built in 2008 on the site of the old youth centre.  The Market was opened in 1911 and there was an access to it between the houses which became known as 4 and 6 Bath Road.  We have focused on the history of the ten houses.  Please click on the links on the side bar on the left to read about a particular property.

The origin of current name of Bath Road is simple.  It was the road which led from the town centre to The Baths.  This was a simple open air affair which had begun its life as a natural pond next to a farm building.  It was fed by the stream that came down from Vilner but had been excavated and lined to make the town’s only public bathing place. 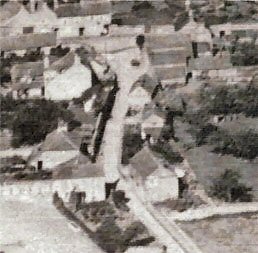 an aerial view of Bath Road in the 1920s

The Tithe map of 1840 shows the Baths as a simple rectangle on the south side of Bullseys Lane walled in and with a block next to it which was presumably the changing rooms were housed.  There was a house next to it which was the farm house.  The property was referred to in the Tithe Survey as a house, garden and baths occupied by Thomas Morgan but owned by William Rolph.  We