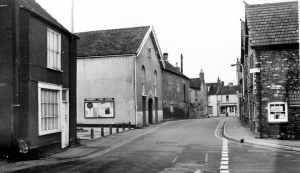 Chapel Street was known by several other names in older records.  The “Avon Extensive Urban Survey Archaeological Assessment Report” of Thornbury prepared by E La Trobe-Bateman has a very early possible name for this street.  The report says “Le Raten Rew or Raton Rewe, meaning ‘rat-infested row of houses’, appears in two documents dating to 1474 and 1497 and it may be that it refers to what later became known as Rotten Row, now Chapel Street.”

It is interesting to note that in the eighteenth century records we have seen the street doesn’t seem to have a name.  It is referred only as ‘the lane leading to Grovesend’.  We have also seen references to it as the ‘Back Lane.’  This may reflect the fact that there were very few buildings on this street at the time as most of the development took place in the late 1700s and early 1800s.  The 1840 Tithe Map uses the name ‘Rotten Row’.  It is generally assumed that this name is derived from the accumulation of butchers’ shops in the area.  While we do not think that there were a great many butchers in this street at any one time it does seem that from the late eighteenth century onwards there was generally at least one butcher in the street and often two or three.

Although only a short street, it does have several important buildings.  These include the Cossham Hall, the Armstrong Hall and the United Reformed Church.  The photograph above was taken about 1972 after the opening of the Armstrong Hall.  Note the building next to the Cossham Hall on the left which had been Thompson’s bakery, also the building on the right (now the opticians at 7 Chapel Street) which was then a cafe.