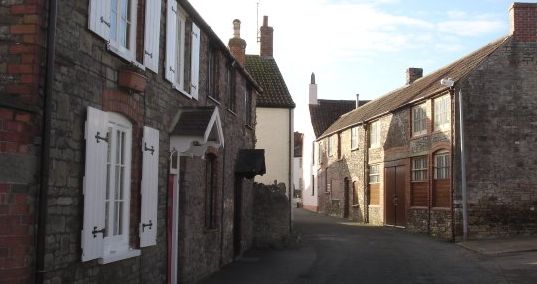 Crispin Lane now runs from Pullins Green towards Blakes Road.  It is a dead end for vehicular traffic, but pedestrians can walk through to Blakes Road.

The name of ‘Crispin Lane’ came into use in the early 1950s.  The name was derived from ‘The Crispin’, a beer house which used to be situated in the lane.  The first use of the name ‘Crispin’ which we have found is the 1871 Census in which it refers to ‘The Jolly Crispin’.  After that time, it is just called ‘The Crispin’.  It is assumed that the name is derived from the fact that James Cullimore who ran the place was a shoemaker in addition to being a beer house keeper.  Saint Crispin is the Patron Saint of shoemakers.

Previously the lane had several names in the past including Mutton Lane and Blakes Avenue.  The 1840 Tithe Map, for example, calls it Mutton Lane.   In early documents going back to 1683 the lane is just referred to as the ‘lane leading to a ground called Blakes’.  Blakes was the name of a field now used as part of the the Castle Sixth Form Centre playing field.

Click on the links on the left sidebar to read about individual houses.  Number 2 Crispin Lane has a long and interesting history and we have divided the history into separate periods of the property’s life.  In the case of number 6 Crispin Lane there were at least houses on the site of the present house and it was not possible for us to distinguish between the occupancy of these separate houses.