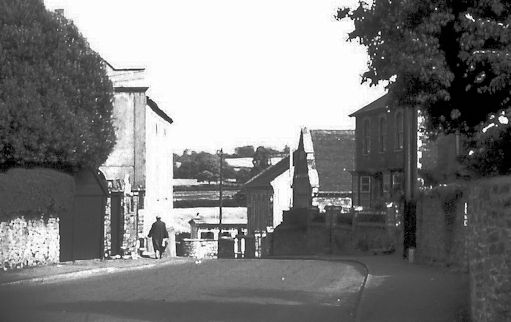 The road called ‘Gillingstool’ now runs between the junction with Pullins Green to its junction with the road called Knapp Road.  It has always been an arterial route leading east from the town serving Sibland, Grovesend, Tytherington, Crossways and The Hackett.

The name ‘Gillingstool’ or Gillingstoole’ appears in very early records of Thornbury.  Although there are several different theories, the origin of the name is uncertain.  Various old documents make reference to there being a pond or pool at Gillingstool there and that Gillingstool was a ‘watering place’.  The 1841 census route description refers to ‘Duckingstool commonly called Gillingstool’ which suggests a possible origin.

The road crosses the Borough boundary at the stream at the bottom of Gillingstool Hill, just past the junction with St Davids Road.  The 1841 Tithe Map and the 1881 OS Map both clearly show that there was a pond on the southern side of the road.   The pond has disappeared and the stream has been culverted.  The boundary is now marked with a boundary stone (cut from Thornbury Rock) lying on the grass verge, close to where another stone had lain until it disappeared in the nineteenth century.  A row of Cattybrook bricks were also placed across the pavement to indicate the position of the old boundary line.

The section of the road within the borough is known as ‘Gillingstool Hill’.  It was once called ‘Burgage Hill’.  Several records refer to Burgage Hill as leading from St John Street to Gillingstool.  This section of the road was the site of the Baptist Chapel which was opened in 1789 on land which had been owned by William Osborne.  We have copies of deeds relating to a property here called ‘Burgage Hill’ which passed through William Jones in 1681 to the Coventry family, then Ann Burgess, the Corp family, William Green and finally in 1782 to William Osborne.

Opposite the Church lay the Council School (first opened as The British School in 1862) and a few houses and cottages.   The map of Gillingstool Hill shown below was made about 1903.  It shows the two houses opposite the Baptist Chapel, known as Gillingstool Cottage and Jubilee House which were demolished in the 1970s and the land incorporated into Rock Street Car Park.  There had been two cottages on a plot of land between Jubilee House and the School, but these were demolished in 1898 to allow the Infants School to be built.