in the High Street 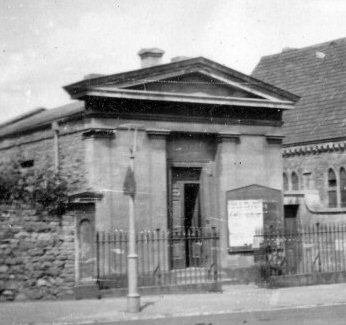 A Select Committee Inquiry in 1833 examined the parochial registration system in England and Wales and recommended a civil registration service.  This was brought into effect on 1st July 1837 when all births, marriages and deaths which occurred after June 1837 had to be registered.  This remains very much the basis for the system of registration in use today.  The Marriage Act which was part of this change in legislation was fairly controversial as it ended the Church of England’s virtual monopoly in registering such events.

In practical terms it meant that Thornbury had to have a Registry Office.  The problem was where it was to be sited and who was to build it.  At this period the matter was the responsibility of the Board of Guardians of the Thornbury Union, which later became Thornbury Rural District Council.

The Guardians seem to have dealt with the second of these problems very quickly.

The architect that they chose was a young man Samuel Whitfield Daukes who was born about 1811 and aged only about 25 at the time of submitting his design for the Register Office.  Samuel Daukes had been born in Middlesex and was the son of a business man.  He trained in York and set up his architect’s practice in Gloucester in 1834.  In 1836 he submitted his plans to Thornbury.  This was also the year he married Caroline Sarah White of Long Newnton and the couple lived in Barnwood.

His later career shows how talented he was.  From 1839 to 1842 he was architect for the Birmingham and Gloucester Railway and he built the Cheltenham Railway Station in 1840.  He designed the Park Estate in Cheltenham and many of the buildings in it including Cornerways.  His other works include the Montpelier Exchange now Barclays Bank in Cheltenham, the Tudor style Francis Close Hall in Gloucester (1849) which is now part of the University of Gloucestershire.  He was also the architect for two very fine mansion houses; Abberley Hall (1844) and Bricklehampton Hall (1848) in Worcestershire.

By 1848 he had set up a practice in London and designed what became Colney Hatch Lunatic Asylum.  He still seems to have retained contacts in the Gloucestershire area because he was responsible for the work on Eastwood Park Mansion House which was enlarged and largely rebuilt in 1865.  He died on 8th March 1880 leaving a widow, Caroline Sarah Daukes of the Knoll, Beckenham.  He also had premises at 7 Whitehall Place, Middlesex.

The design also seems to have been a relatively simple matter.  Samuel Daukes was an admirer of Pugin and his designs included churches in the neo-Norman and Perpendicular.  He was able to use the