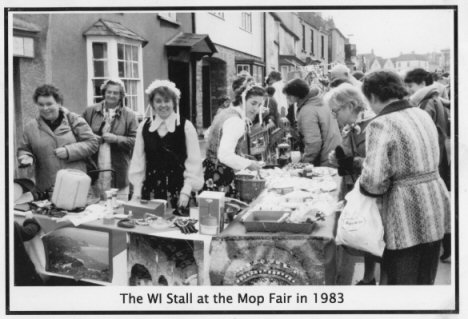 The term ‘Mop’ derives from the fact that each person was supposed to be carrying an implement to indicate the trade for which they were seeking employment and the mop was used by general domestic servants.  A large number of people came from far and wide to take part and this encouraged another large group of people hoping to ply their services to the assembled crowds by entertaining them, feeding them and selling their produce.

In browsing the newspapers of the nineteenth century we discovered a number of interesting articles about the Mop, most of which appeared in the Bristol Mercury.  We have assumed that the Mop was an ‘ancient’ tradition in the Town, but we found that a report dated 1880 which suggested that the Mop had only been running in the Town for 35 years.  We have listed below those articles, or extractions from them, which show how the Mop changed during the period.

The first article dated 19th September 1857 shows that there was already a growing resistance to having the Mop in the town:

The Mop – During the past week a handbill has been posted about the town announcing that the Mop would be held as usual.  We regret that such a decided step should have been taken by any one person without having authority to do so as we are informed that it is the wish of the magistrates, gentry, guardians of the poor, the inhabitants of the town and farmers of the neighbourhood, with but few exceptions, that the mop should be discontinued, believing that it tends to injure the morals of those whom it was originally intended to benefit, viz. the farm servants.  A register office having been established in the town for the convenience of the masters and servant who have been in the habit of hiring at mop, a more respectable and certain way of obtaining their desires is presented to them, open to access at any time.  It is to be hoped that the masters will not attend at the Thornbury or Sodbury mops, but seek their servants from the register office.

On 20th March 1858, the following report was published:

The Mop was held on Friday last, and by the unthinking crowd would be, and indeed was , called a good one, as a number of persons attended, but the ordinary observer could hardly fail to notice the almost entire absence of the more respectable of the farmers and their wives, as well as respectable servants – a large number of whom, we are informed, in Sodbury and Berkeley, as well as in Thornbury, have availed themselves of the intervention of the Register Office.  The townsmen will feel that an incubus is removed when these obnoxious meetings are discontinued.

In March 1862 a report was published described a great detail appears in the Bristol Mercury which describes the Mop of March 18th:

The arrival, as early as Sunday, one of these curious vehicles, in which it is contrived to huddle not only monstrosities for exhibition, but the exhibitors themselves, and often that adjunct little corps, of whom Hood said ‘The charge of infantry was most terrific’, indicated that the coming event of the Mop had cast its shadow before. Monday brought many other of these dingy indescribables into town; and it was painful to see the proprietors, under heavy rain, and amidst most tenacious mud, dovetailing their extraordinary machinery, and industriously preparing for the noise and glitter of the morrow.  Whatever feelings were entertained years ago respecting rough wayfarers on the world’s highway, they now thanks to the humanising pen of Dickens, are frequently contemplated with interest and sympathy.  He has taught us that even these rude caterers for appetites as rude have hearts in their bosoms, after beating with affectionate anxieties, and warned by general instincts.

Notwithstanding that the fore part of Tuesday was dull, raw and drizzling, there was a great influx of visitors and candidates for situations, some holding aloof from places ‘not high enough for them’ their own expression, and ambition in this grade is becoming a marked feature), others taking the earnest money with grateful readiness, then away to those magazines of marvels, opposite to which stand crowds with open mouths and distended eyes.