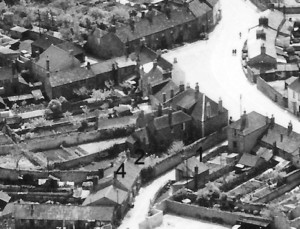 Today, Saw Mill Lane in Thornbury is the name given to little quiet estate of houses built in the 1990s by Crest Homes.

It enters the saw mill site from Pullins Green between number 1 Pullins Green and 23 St John Street which for many years was Adrian’s the hairdressers’ salon.  Three small houses are marked in black on the photograph by the numbers they were known by in the 1950s.  They are shown on the map shown on the right  which was printed in the 1960s.

We know that the houses used to accommodate employees at the saw mill and had initially assumed that they were built for that purpose.  We were surprised however to find the houses shown on the 1840 Tithe Map, long before June 1886 when Edmund Cullimore bought the land for the opening of the mill.  (Note – the mill was listed in the 1889 trade directory and the 1891 census shows the occupants of the houses were workers in the Mill.)  Before the saw mill was built the houses were simply thought of as part of St John Street and they were described as in John Street in the earlier censuses.  Read more about Edmund Cullimore and the Saw Mill

The saw mill closed about 1957.  The estate of Edmund Cullimore was advertised for sale in 1958 and this included the three houses in “Saw Mills Lane.”  In the sales catalogue for the houses Number one was said to comprise of “three rooms on the ground floor with store room and offices over let to Mr W. D. Woodman at an inclusive rental of 7/6”.   Numbers two and four were described as a pair of stone built cottages “in the occupation of Mrs S. Taylor and Mr W. Holpin at the respective rentals of 5/- and 6/- per week, the shed being in hand.  Number 2 contains front sitting room with tiled grate, kitchen and scullery with 3 bedrooms over.  No 4 comprises front sitting room, kitchen and 3 bedrooms over.”

The land was sold to Thornbury Rural District in 1963 for use as a Council Depot for refuse vehicles, building maintenance and other direct services.  This depot closed about 1969 when