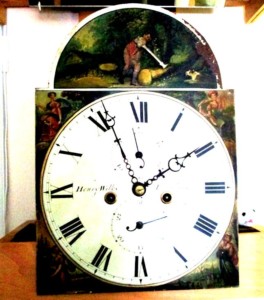 We are greatly indebted to Dr. Graham Dowler’s excellent reference book “Gloucestershire Clock and Watchmakers” (Phillimores 1984) and to Sir George White of The Worshipful Company of Clock-makers (at Salter’s Hall, Fore Street London, EC2Y 5DE) for sources of information about clock-makers.

We have no expertise on the subject of clocks but while we were researching the history of Thornbury we became fascinated by the number of clock and watchmakers associated with the town.  We have created this webpage to bring together what we know about these people and to show images, where available, of examples of their clocks.  We would love to hear from anyone who has a Thornbury clock or who has further information about any of the clock-makers.

Sadly it would seem that there was not such a wonderful artisan tradition of clock-making that we had at first supposed when we first saw the long list of clock-makers.  The reason for the large number of clock-makers in the nineteenth and early twentieth century may lie instead in developments in technology.

Thornbury Museum has a more detailed account of this development in an exhibition next to an example of a Wilks clock.  The notes there say;

“By the early 1800s there were national firms making dial blanks and prefabricated movements.  This opened the gates to a mass of small town and village ‘clockmakers’ who co-ordinated the assembly of long case clocks with the help of local cabinet makers dial painters and blacksmiths.”

The Museum has the workings of an eight day long case clock put together by Henry Wilks in Thornbury between 1813 and 1828.   We have a photograph of this on the left.

According to Thornbury Museum the movement of this clock

“was probably manufactured in Birmingham and the case made by a local craftsman.  The clock has a painted dial. Up until 1786 all dials were of brass but the painted dial was cheaper to produce and gave much more scope in style.  The false plate behind the dial is cast with the dial maker’s name W. Francis.”

William Francis was a prolific dial maker who worked first at Birmingham from 1810 to 1831.

The implication is that what we have in many cases is the result of the flowering of nineteenth century ingenuity and the growth of mass production rather than the presence of so many gifted local craftsmen.  This enabled shopkeepers who were not great artists in clock-making to put together the various mass produced components of a clock to suit a particular customer.

We have more information about Henry Wilks (or Wilkes as the spelling appeared in most records).   Dr Graham Dowler’s book says that Henry Wilkes was apprenticed in 1793 in Bristol.   Henry died on 17th April 1828 aged 48.  Read more about Henry and Mary Wilkes

Dr Dowler also lists the following as the clock-makers of Thornbury;

Collings – some of Thornbury’s most notable clockmakers were memb