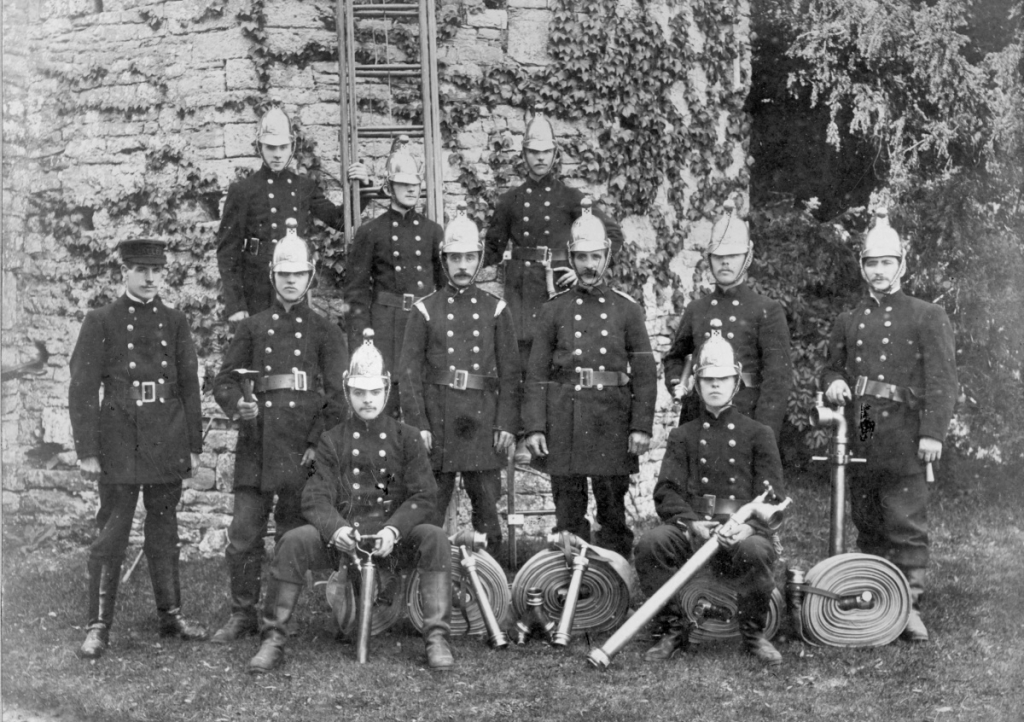 Fire was always a recurring and terrible concern for householders throughout Britain.  This was because houses were frequently timber framed, usually thatched and often very close together.  Presumably this fear was aggravated by events like the Great Fire of London in 1666 which demonstrated so clearly how fast fire travels and the scale of the damage it could cause.

In Thornbury we have found that many documents, including wills and house deeds, refer to past disasters caused by fire.  John Gayner the elder‘s will of 1726 for example mentioned “all those my three burnt houses in Thornbury adjoining together” that were purchased from George Pearce.  George Pearce was a blacksmith and we feel that may well have been the reason for the fire.  Rosemount at 66 High Street was partly built on a “plot of ground where a messuage formerly stood but since burnt down.”  However there were very many others.

Fire Insurance
According to the official website of the Fire Brigade, fire insurance companies made the first attempt to develop an organised approach to dealing with fire.  “Following a public outcry during the aftermath of probably the most famous fire ever (in London in 1666), a property developer named Nicholas Barbon introduced the first kind of insurance against fire.  Soon after the formation of this insurance company, and in a bid to help reduce the cost and number of claims, he formed his own Fire Brigade.  Other similar companies soon followed his lead and this was how property was protected until the early 1800s.  Policy holders were given a badge, or fire mark, to affix to their building.  If a fire started, the Fire Brigade was called.  They looked for the fire mark and, provided it was the right one, the fire would be dealt with.”

In Thornbury one house, 48 High Street, still displays an interesting fire mark showing it was insured by the Sun Fire Assurance Company.  We do not know yet know who would have been responsible for putting out a fire in this property should one have occurred about that time.  There wasn’t an organised “fire brigade” in Thornbury at this time and we can only assume that the fire mark served to encourage volunteers to help put out the fire as it was an indication that they would be rewarded by the insurance company.

It was certainly important to have one’s house insured against fire and home owners made many provisions for this.  The deeds of houses often contain details of a mortgage arranged only if there was a valid fire insurance certificate.  At least one will to our knowledge (that of Hester Bagnell  of 1801) specified that the beneficiary could have a property for his/her life time provided it was insured against fire.

Using the Fire Insurance Companies to provide fire services addressed some but by no means all of the difficulties in taking action to put out fires.  The fire insurances companies had a problem finding the necessary volunteers, water and equipment to put out a fire.  An insurance company only had a duty to the houses that were insured with that company.  If a house adjoining an insured property was burning, it was a major threat to the policyholder.  However in that situation the insurance company had no obligation to act until the insured property was actually alight.
This could be why (as we found in Wikipedia) “by 1825, fire marks served more as advertisements than as useful identifying marks; some insurance companies