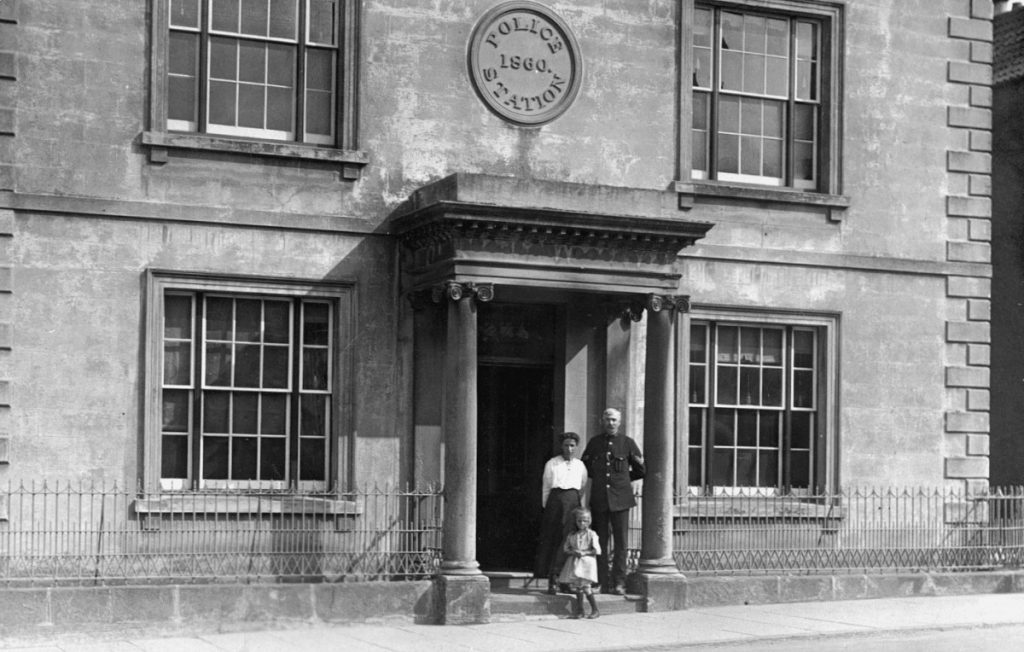 The above photo shows the police station which was opened in the High Street in 1860.  It is not our intention to write a detailed history of the Police in Thornbury, although we know that the Gloucestershire Constabulary was only the second County Police Force to be established and dates from the appointment of Chief Constable Anthony Lefroy on 9th December 1839.  Thornbury was one of the thirty towns and villages to which police officers were then posted.  In November 1840 the Home Office approved the appointment of the first Police Sergeants in the county and 38 were appointed.  At this time Police Superintendents were also appointed and one was posted to Sodbury to superintend the Sodbury, Thornbury and Marshfield District.

In researching other aspects of Thornbury life, we have come across some interesting information relating to the force in Thornbury:

First, an outline of what we know about the various police stations in the Town from the time of the 1841 census:

1841 – this places the police station in the area near the junction of St John Street and St Mary Street, near where the Mumtaz (formerly the Plough) now stands.  The 1840 Tithe Survey shows this part of the town was the location of several ‘public’ buildings such as the Workhouse and a Schoolhouse.  We don’t know exactly where the police station was located as most of these buildings were demolished before any detailed maps were made of the area.  One building was left which later became known as 2 St John Street and this building later became known as The Courthouse although we have found nothing yet to confirm that there was a Court held there.  The other buildings were replaced by Trayhurns the butchers, the Plough Inn and more recently by Quaker Court.

At the time of the 1841 Census, Daniel Harrison was the police sergeant and he lived there with his wife, Charlotte and son, Eli.  There were also three police constables there: Edwin Riddiford, John Harrison and John Osman.  It is interesting to note that five other people were listed as being there on census night – these included John Thomas aged 14, George James aged 10 and James Curtis aged 13.  The census enumerator had written against these three young people that they were Vagrant and Prisoners, but this description was crossed through.  The other two were William Limbrick aged 45 and James Limbrick aged 25, both of whom were noted as Agricultural Labourers and a ‘ditto’ mark which we assume meant that they too were ‘Prisoners’.

1851 – by this time the police station appears to have moved to Pullins Green, the house which later became 11 Pullins Green, better known these days as a Chinese Take Away and Fish and Chip Shop.  The 1859 rate book actually refers to the property as ‘The Police Station”.  Ron Lewis who lived there much later remembers a small ‘barred window’ which he felt could easily have belonged to a cell.

In the 1851 census the house was occupied by William Taylor, a police sergeant, aged 32 from Sulgrave, Northamptonshire.  Living with him were his wife, Hannah, aged 37 from Oxfordshire and their children: Thomas aged 8, William J. aged 5, Cornelius aged 3, and Ann H. aged 1.  They also had two lodgers living with them, Benjamin Holloway, a police constable aged 33, and John Newman a