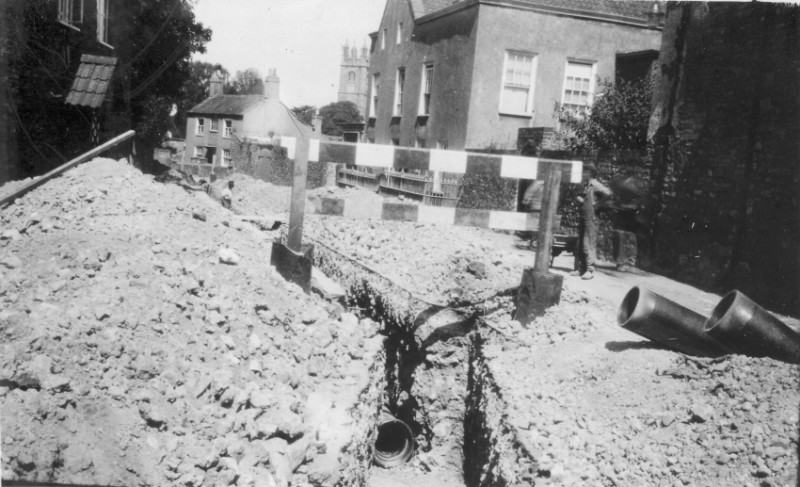 Installation of sewers in Castle Street near Chantry

In an interview given to the Thornbury Oral History Society, George Excell recalled moving into a house on The Plain in Thornbury during the 1920s.

“It had no tap water, no proper sewerage, a man used to come round with a horse and cart and empty the bucket toilet, and gas was used for lighting and cooking.  Water was obtained from a hand pump from a tank under the scullery and drinking water was obtained in buckets from the mains water tap across the road which had replaced the old hand pump.”

Thornbury appeared to be having some difficulty in entering the Twentieth Century with regard to public health and still relied heavily on earth closets, cesspools and bucket toilets.   This is despite the Public Health Act of 1875 which was established in the United Kingdom to combat filthy urban living conditions which

“caused various public health threats, the spreading of many diseases such as cholera and typhus .. because sewage was flowing down the street daily, including the presence of sewage in living quarters.  The Act required all new residential construction to include running water and an internal drainage system.” (Wikipedia).

Thornbury for quite some time appears to have been a very smelly place indeed and “sewage flowing down the streets” was indeed the problem for very many years.

It was the subject of a letter of complaint from the vicar of Thornbury, William Holwell, who accused the local Steward of blocking the flow of sewage down Castle Street and into the Pithay behind the church.

“There is directly before the Parochial Church, and close adjoining to my dwelling house, a most insufferable nuisance which has been long a real subject of complaints and which is daily increasing by unusual, and, as I apprehend, illegal encroachment. Your Grace’s Steward, Mr James Vaughan, who seems by his conduct to set every thing and person at defiance, has made the Church Way, and the King’s Highway, and part of the Green before the Church, the Common Receptacle of all the Filth of the Town.  Ancient water courses (contrary to express laws) have been stopped up, which used either to receive part of the washings, or decently to carry off the remainder into one of your Grace’s grounds, called the Pitties.  Thus the King’s Highway is destroyed, and the Church insulted; my house is become offensive and the whole Parish scandalized by an instance not to be paralleled in this Kingdom.  The Filth thus collected, and after some months offensive continuance, dug out, and laid in heaps by the Church and before my windows”

A petition signed about 1873 by the owners and occupiers of houses in Thornbury to the Sanitary Authorities of Thornbury Union had some very graphic descriptions of these “nuisances” as they were always called in the newspaper reports.  The petitioners in this case requested that the problems should be remedied, not as one might expect by having sewers installed, but by the