Unfortunately we are not in a position to attempt an in-depth history of the telephone service in Thornbury, but as a start, we thought it worthwhile sharing some relevant snippets which we have come across in our research.

Prior to 1869 we know that people wanting to send urgent messages had to go to Bristol to use the telegraph service.  We have an example of one such telegram sent in 1855 to Henry Hume Lloyd in London notifying that his father was dangerously ill and requesting that he and his brother return home immediately.

In December 1869 the Monthly Ilustrated Journal announced that “the Postmaster – General has made application to the Thornbury Highway Board for permission to bring the telegraph wires along the road from Grovesend requesting an early reply.  We may therefore expect to have a telegraph station in Thornbury shortly.”

The Post Office records indicated that the town had a Telegraph Office by 1871.

The Telephone Service
We can’t be sure when the first telephone came to town.  Bristol’s telephone service started in 1879 when the Telephone Company Ltd opened the exchange in Queen Victoria Buildings, 16 High Street Bristol on the corner with St Mary le Port Street.

We are not sure if anyone in Thornbury could make use of the telephone at that time or whether they had to travel to Bristol or Gloucester to do so.  In 1904 the first telephone exchange was opened in Thornbury.  The exchange was located at the Post Office, then located in Pye Corner, in the building now known as 28 High Street.  It offered calls through a public telephone available between 8am and 10pm on weekdays and between 8am and 10am on Sundays.

We have started to record any references to early telephone numbers in the town.  The earliest mention of a telephone number was found in Browns Almanac of 1904: Clement Williams who ran the Thornbury Coal Company was listed in the Almanac with a telephone number ‘5’.  By 1914 we have found six businesses or individuals who had their own telephone with numbers ranging from 3 (Henry Privett Thurston, a solicitor) to 22 (Thomas Llewellin Davies, a medical practitioner) so there are likely to be others we have not yet found.  By 1927 the highest telephone number we have found so far was 40 (E. J. Underhill, Ministry of Employment). 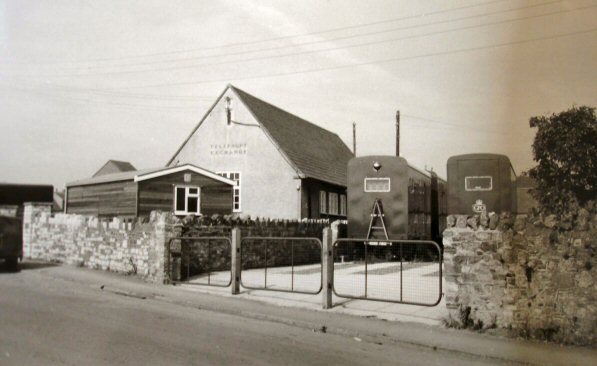 The telephone exchange moved to a site in Rock Street in 1936, now part of the St Mary Street car park.  The above photograph shows the exchange when located in Rock Street.  It moved again in 1969/70 to the site of the Thornbury Rural District Council Depot in Saw Mill Lane.