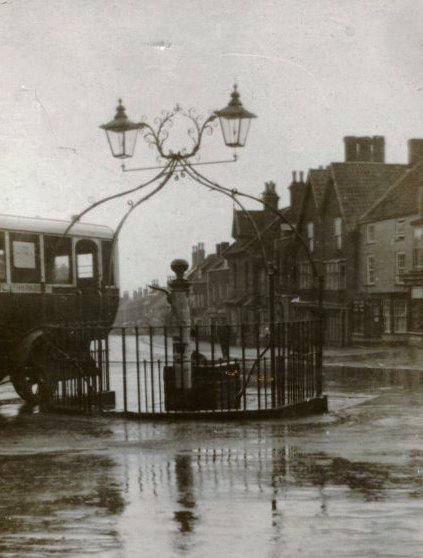 The town of Thornbury was largely built on the famous “Thornbury Rock” (a dolomitic conglomerate).  It was built on a natural ridge so there are comparatively few natural water sources, except four streams.  The townsfolk have adopted various methods to ensure they had enough water to satisfy their needs which include:

Streams.  They have a historic significance because the bounds of the ancient Borough of Thornbury are essentially the streams that surround the town.  The streams and natural sources are the obvious starting point and they are described here.  Read more about the streams

Wells and Pumps.  Wells were dug at various periods and they are described here.  Many of them had pumps.

The Thornbury Pump. The most well known of the pumps in the town, that at the bottom of the High Street at The Plain, has become an icon for Thornbury; which is why it appears in the photograph above.  Here is also story of the controversy surrounding the site of the pump.   Click here to read more

Cisterns.  A method of supplying water which now has become very modern and fashionable is one that was used from quite early in the history of the town of Thornbury – the cisterns that were dug to collect rainwater from roofs.  Here you can read how Thornbury was ‘Eco- Friendly’ much more than a century ago.   Read more about cisterns

Railway Water.  When water was finally piped into Thornbury for use at first at standpipes in the road, it did not come from the most obvious source, a reservoir or lake, but a water tank at the local railway station.  Click here to read more

Maclaine Fountain.  One of the uses of piped water was to supply a feature of Thornbury that is now at the top of Castle St and which marks an event in military history that was the source of pride to a nation but of sorrow to the Maclaine family.  Click here to read more

Piped Water.  Eventually, Thornbury came to use piped water, like every other town, from a nearby reservoir.  Click here to read more