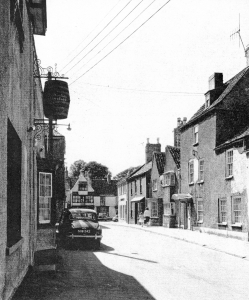 The photograph on the left was taken in the early 1960s showing Silver Street looking from the Hawkes House (then known as the Barrel Inn) towards the High Street.

Silver Street was known by several other names in older records mainly ‘Chipping Street’ but also ‘Market Street’.  The word ‘Chipping’ is said to be derived from an old English word ‘ceapen’ meaning ‘market’.  We know that in the 19th Century the town’s market was located in the area of the High Street near the junction with Silver Street and there are suggestions that in earlier times the market may have been located in Silver Street itself.

Our earliest reference to the change of name to Silver Street appears in the last will and testament of George Rolph dated 20th May 1815 in which he refers to his property ‘fronting the street there called the Chipping or Silver Street’.  The name of Silver Street was used on the 1840 Tithe Map and in the various trade directories and censuses since 1839.

The origin of the name of ‘Silver Street’ in other towns has been ascribed to its association with prostitutes.  We can’t say for sure if this was the reason in Thornbury, but we also find no other reason for calling it by that name.

We are particularly grateful to South Gloucestershire Council who allowed us to copy the deeds and other documents relating to the houses on the north side.  Luckily they kept these deeds in packets relating to the house numbers introduced in the early 1950s.  This has allowed us to trace the history of some of these houses back to the 1600s.
The documents have shown two important places in the street.  One was ‘Cobb Hall’, the other the Corn Market.  We have found that Cobb Hall was what later became incorporated as part of 3 Silver Street.  We don’t know why it was called by that name.  From the early 1700s onwards, it was used as a house, but it is possible that it was previously connected in some way to the Corn Market.  The two properties either side of Cobb Hall include a reference that they were ‘near the Corn Market’ in the description of their location.  They are the only houses in the street to refer to it.

We will be adding some information about the history of the Barrel, now called The Hawkes House, at some time in the future.