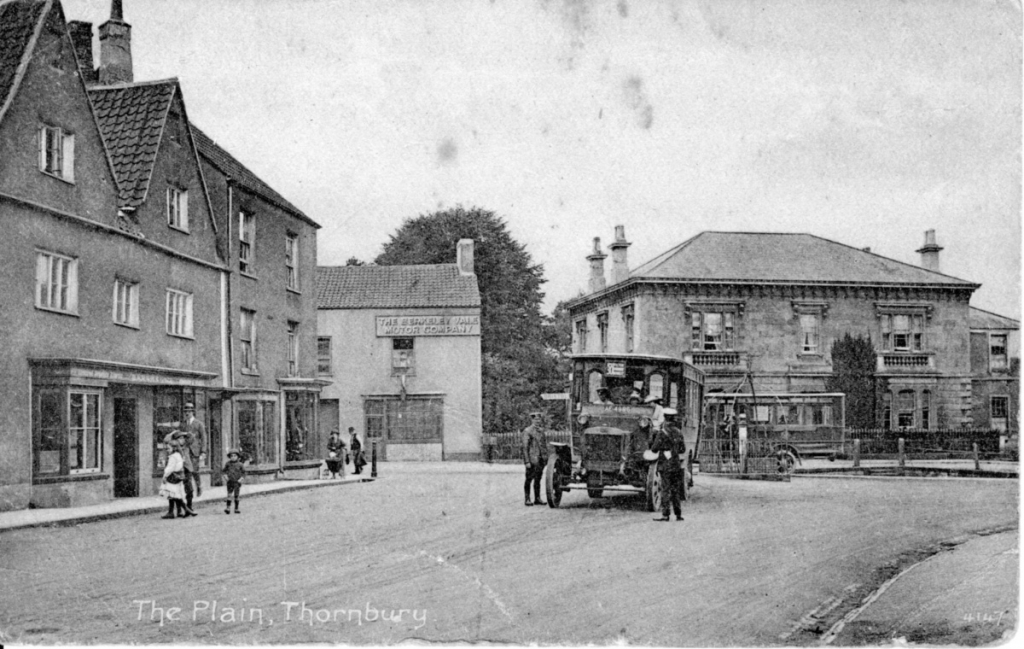 The Plain has always been at the heart of Thornbury.  At the junction of three roads leading into the town, it is the natural place where people congregate.

As can be seen in the above photo it was used as the bus terminus.  As motor vehicles came more popular there was growing concern about the possibility of accidents on this dangerous junction.   On 30th July 1921 the Gazette reported on the Town Council’s concern about the increased traffic congestion in Thornbury.  It was suggested by Councillor George Bernard Symes and seconded by Alfred Riddiford  ‘That the divisional superintendent of police be asked to arrange for a constable to be stationed on The Plain at Thornbury for point duty’. The motion was agreed to, but we don’t know if it was put into effect.

The Plain has also been used for special events, important public announcements, parades, religious services, a source of water from the pump and the town well (which was outside the Bank) and the site of the old cattle market.  It was also the site for the bonfire on Guy Fawkes night and at other times of celebration.  In more modern times, the Pump area is used for personal announcements of birthdays and anniversaries.

The Plain hasn’t always been called by that name.

Bells Cross – many of the older records we have seen refer to ‘Bells Cross’ and although we have no map showing where this was located, we do have sufficient clues to make us think that this was the ancient name for The Plain.  As early as 1617 the Court Rolls mention ‘the common well in the high streete of the same borrowe neare unto Bells Crosse‘.  We have seen several indentures of late 18th or early 19th century which refer to properties we know were located on The Plain as being ‘near Bells Cross‘.  One dated 1824 refers to the property ‘at a place called Bells Cross or The Plain‘.  Another dated 1867 which relates to the erection of a weighbridge ‘near a street or place heretofore called Bells Cross and now called the plain‘.  We are not sure why it went by that name – whether the ‘Bell’ was the name of a pub (there was a pub of that name known to be in Thornbury in the 1700’s) or the name of a person with property there.  The name ‘Cross’ may have referred to the crossroads or to a religious cross erected there.  There was a similar place at the other end of St John Street where Pullins Green is located ‘where St Johns Cross heretofore stood’.

The census records refer to Colwell Street in all the census records up to 1881.  In that year, the route description is still using Colwell Street, but the detailed listings show the street was then being called The Plain.  Thereafter the name of The Plain was used consistently.  In the Trade Directories, from as early as 1850’s addresses are referred to as being on ‘The Plane’.  Again by the 1880’s they were usually the present spelling of Plain.