In the course of our research we have come across snippets of information about people from Thornbury and the surrounding areas who served in the Army during the 1800’s.  Most of the records were found in the catalogue of the Public Records Office or on the Ancestry website.  We have included the records of men who were said to have been born in Thornbury, but please note that this would include people born outside of the town.  Click on the links on the left to read about the people from Thornbury and the surrounding areas who served as seamen in the Royal Navy during the 1800’s or in any capacity in other wars.

In a few cases we have discovered interesting information about their experiences and their families and these can usually be found by clicking on the underlined hyperlink contained in the text below.  We particularly recommend looking at Hector Maclaine Jnr.

Francis Bain – service records show that he was born in Thornbury and served in the Royal Horse Artillery Soldiers Unit 5 Battalion.  He enlisted in 1807 aged 12 years.

John Barge – service records show that John was born in Thornbury and served in the Royal Horse Artillery Soldiers Unit 3 Battalion. He  enlisted in 1805 for 21 years.  The records appear to suggest that he served between 1805 and 1815.  The reason given for his discharge was ‘Pension’.  It seems likely that John was the John Barge born on 15th September 1780 and baptised in Thornbury on 28th December 1785.  He was the son of John and Betty Barge.

The family seems to have more than one link to the military.  John Barge appears to have had a brother called Guy Barge who was born 16th October 1778.  His parents were described as John and Elizabeth Barge.  Guy and his wife Sarah had a daughter Mary who was born 16th August 1810 but not baptised until 2nd February 1812 at which time Guy was said to be a Private in the South Glos Militia.  However when their son John was baptised on 20th March 1814 in Thornbury Guy said to be a Private in the North Glos Militia.

James Bell – joined the Royal Artillery at Bristol on 5th January 1877.  He received no bounty but a free kit.  He was a farm labourer aged 19 years and one month.  He said he was born in Thornbury.  He signed on for 12 years.

George Cave – service records show George was born in Thornbury and served in the 14th Foot Regiment.  He appears to have served between 1832 and 1853.  He was discharged aged 43.  His discharge papers on the Find My Past website show that he was 21 and a wood sawyer when he signed on for the 14th Regiment of Foot on 1st February 1832.  He was discharged on 19th October 1853 because he was unfit for for further military service.  He was discharged in Limerick. 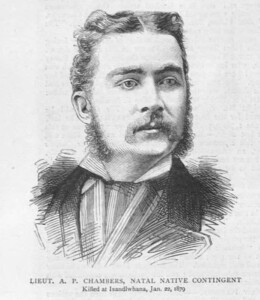 Augustus Patrick Chambers was the son of George and Sarah Chambers who lived at 47 High St in Thornbury. He was baptized in Thornbury on 9th October 1850.  His obituary explains that he lived at the Cape for several years and was ‘engaged in mercantile pursuits’ . Eventually he joined the Natal Native Contingent and rapidly became a lieutenant.  He fought at Isandlwhana on 22nd January 1879 where he was severely wounded and required treatment. He then immediately re-joined the front where he was fatally wounded.  His troops lost three captains, seven lieutenants and twelve sergeants in a terrible battle.  Isandlwhana was the first major battle of the Anglo-Zulu war and was a humiliating defeat for the British and colonial troops.

William Chappell – service records show that he was born in Thornbury and served in the 23rd Foot Regiment.  They show he was discharged aged 36 after a period of 12 years service.  The date of the record is 1807, so we assume that was year he was discharged.

William Comley – service records show William was born in Thornbury and served in the 56th Foot Regiment.  He appears to have served between 1814 and 1827 and was discharged aged 41.  William’s discharge record on the Find My Past website shows that he signed up for unlimited service with the 56th Regiment of Foot at London on 14th April 1814 aged 28 years.  Most of his time (July 1815 to July 1826) he was in the East Indies and his discharge was on the grounds of chronic rheumatism which appeared to the effects of tropical service.  When he was discharged at Manchester he was 41 years old, five feet six inches with dark hair and eyes.  By trade he was a servant.

Charles Cullimore – service records show that he was born in Thornbury and served in Royal Artillery 5 Battalion.  He enlisted in 1855 aged 20 and was transferred to Field Batteries Detachment in 1858.  The 1861 census shows he was a soldier based in Devonport and he was described as a driver.

We believe that Charles was the one baptised on 7th May 1837 who was the son of James Cullimore, a labourer and his wife, Frances who lived at Crossways.  The 1851 census shows them in Kington.  The 1861 census shows his parents living in Easton Hill, but by then Charles was in the Army.  By the 1871 census he was back in Thornbury where he was a farmer of 80 acres at Upper Morton.  He was living there with his brother, John, who was a land owner.

James Cullimore – service records show he was born in Thornbury and served in 81st Foot Regiment.  It appears he may have served between 1840 and 1852 and was discharged aged 31.  His discharge papers appear on the Find My Past website and they show that James was a shoemaker aged 19 years when he signed on to join the 81st Regiment of Foot in Bristol on 11th May 1840.  He received a bounty of £3 7